Happy World Book Day! (At least to those outside the UK and Ireland, where we mark World Book Day on a different date to the rest of the planet. Don’t get me started…)

In honour of this day celebrating the joy of reading, many people give one another books. In Barcelona, for example, where the concept originated and the date coincides with Diada de Sant Jordi, around 10 per cent of the city’s book sales take place today as thousands of residents exchange written works and roses. I was there last year and it’s an amazing party!

As a result, I decided to follow suit and take the opportunity to send an extra postcard from my bookshelf. This translated book will be the only one I select for someone who didn’t apply to be one of my 12 recipients.

Below is a copy of the letter I sent accompanying the novel I chose.

I’m an author and TED speaker living in the UK. In 2012, I set myself the challenge of reading a book from every country in the world in one year. It turned out to be an amazing adventure, with people around the globe researching, translating and even writing stories to help me achieve my goal.

One nation turned out to be a particularly strong supporter of the project, however. Around a third of the views that my blog, ayearofreadingtheworld.com, has ever received have come from the US. That’s more than three times the number coming from my homeland, which was the second-most-interested country.

Many of your citizens, Mr President, are passionately interested in exploring stories from beyond their borders. Judging by the statistics from my blog, you are the leader of the world’s most internationally curious English-speaking nation.

In recognition of this fact, I wanted to send you a book as a gift. It’s part of a project I’m doing this year to celebrate the five-year anniversary of my original quest. Every month, I’m choosing a translated book to send to a stranger. Earlier in April, I posted a book to a book editor in New Orleans in celebration of the overwhelming American support my project received. However, as many people mark World Book Day by giving books as gifts, I decided to send an extra title today to you.

The book I’ve chosen is The First Wife by Paulina Chiziane, the first woman to be come a published novelist in Mozambique. It’s translated from the Portuguese by David Brookshaw and published by Archipelago Books, one of a number of US-based small presses doing great work to open up international literature to English speakers.

I love this book because it’s funny, challenging and thought-provoking. Like so many of the stories from elsewhere I have read during and since my quest, it turns a lot of the things we English speakers often take for granted inside out.

I know you’re very busy, so in case you don’t have time to read the whole thing, I wanted to share one passage that I think is particularly powerful. To me, this is a brilliant statement of why inequality works for nobody, even people at the very top:

I hope you enjoy the novel.

Which high-profile person would you like to send a book to and what would you choose? Let me know in the comments below.

If you’d like a chance to receive a postcard from my bookshelf, visit the project post and leave a comment telling me a bit about you and what you like to read. The next recipient will be announced on May 15. 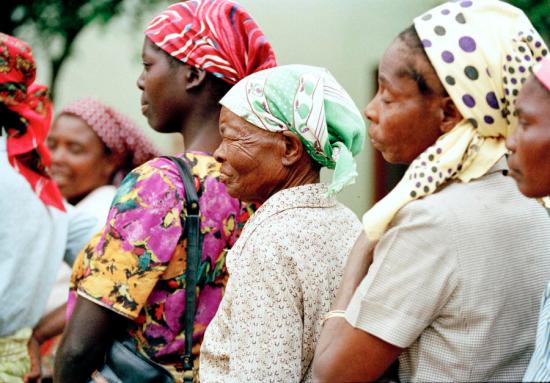 I have been wanting to read this book for more than four years. It came onto my radar during my Year of Reading the World in 2012, when I was finalising my choice for Mozambique. As I wrote in my post at the time, I had actually just read a novel by Mozambican writer Mia Couto and was planning to post about it, when a comment from Miguel made me think twice.

Mia Couto was a literary cliché, he said. I should try to find something else – and Niketche by Paulina Chiziane, the nation’s first-published female novelist, would be a good starting point.

Loathe to be thought to have plumped for a cliché, I embarked on a quest to find an English version of Niketche, which did seem to have been published in translation. But when I contacted the publisher, it turned out that the firm had folded before it was able to release the book. A finished English-language version did not exist.

All was not lost as far as a good alternative to Mia Couto was concerned, however, as this conversation led to the manuscript translation of the extraordinary Ualalapi by Ungulani Ba Ka Khosa, an amazing book that richly deserves an English-language deal.

Yet, while Ualalapi still awaits an anglophone publisher, the last few years have brought good news for Chiziane’s novel. This summer, Archipelago Books launched a version titled The First Wife, translated by David Brookshaw, and I lost no time in snapping up a copy.

As the title suggests, the novel is about marriage – albeit in a rather different form to that which many of us in the English-speaking world are used to, at least at first glance. When Rami discovers that her husband of 20 years, police chief Tony, has been secretly conducting a series of concurrent, long-term extra-marital relationships – effectively practising a form of polygamy – she reacts furiously. Yet her anger quickly gives way to a desire to understand and challenge the warped gender dynamics that have seen her and so many women like her marginalised and silenced across the generations.

Embarking on a journey of personal discovery that leads her to question the traditions and assumptions that have shaped her life, Rami visits dubious love counsellors and wizards, and eventually joins forces with her husband’s unofficial wives to right the wrongs they suffer. In so doing, she reveals the extraordinary potential of female solidarity and exposes the hollowness of patriarchal power – uncovering a self-perpetuating system, in which those who appear to wield influence and to gain from inequality are often the most deluded and damaged of all.

This is a powerful and angry book. Portraying the myriad injustices to which Rami and her contemporaries are subject – from a welter of myths about women’s evilness and tendency to precipitate natural disasters, through cultural rules that dictate men should receive the best parts of the chicken to eat, to the appalling treatment of widows, whose possessions can be appropriated by their in-laws and whose bodies can be commandeered by their brothers-in-law for ‘sexual purification’ – Chiziane reveals the ‘litany that has sent women to sleep down the ages’.

Yet, for all its fury, the narrative is underpinned by an appreciation of the interconnectedness of the human experience. To Chiziane, the suffering experienced by her female characters is part of a loop of wrongdoing and hurt, in which all people are implicated. Rather than women against men, or them and us, gender inequality as seen through this author’s eyes is part of a wider, skewed system, which it behoves all humankind to correct. This is neatly summed up in the description of the ‘cycle of subordination’:

This clear-eyed evaluation of the causes of subjection makes Rami’s discovery of her own agency and worth deeply touching. I was moved to tears by several passages towards the end of the novel, in which she and her friends revel in their femininity and celebrate womanhood – free at last from the mental fetters that formerly made them resent their gender.

The writing is urgent and surprising. As in Ualalapi, there are images that leap from the page and delight with their freshness. That said, there are a number of mixed metaphors that obstruct the sense. In addition, some English-language readers may struggle with the unfamiliar pacing, which makes some events seem rather abrupt, while other minor incidents stretch on for pages. Similarly, several episodes and thought processes are recounted on more than one occasion, which can be a little discombobulating.

These niggles are really beside the point, though. In addition to being a work of great imagination and creativity, this is an important book. As well as setting out a story that enables readers to feel the necessity of challenging patriarchal norms, it provides a compelling comment on the long shadow of colonialism and telling insights into the way tradition moulds minds.

Hats off to Archipelago Books for bringing this towering work to the English-speaking world. Might I persuade you to take on Ualalapi next?

The First Wife (Niketche) by Paulina Chiziane, translated from the Portuguese by David Brookshaw (Archipelago Books, 2016)

Picture: ‘Elections in Mozambique’ by United Nations Photo on flickr.com