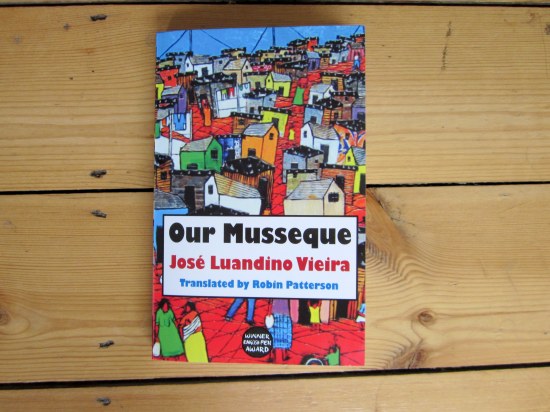 February’s book of the month has special significance for me. It was translated by Robin Patterson, one of the nine volunteers who came to my rescue to convert Olinda Beja’s A casa do pastor into English when I was unable to find anything I could read from São Tomé and Príncipe back in 2012. At the time, Robin was just starting out as a translator, so it is wonderful to see his efforts come to fruition in this lovely edition of Our Musseque by Angolan writer José Luandino Vieira.

In fact, I am doubly pleased to see this novel because, as I found with São Tomé and Príncipe, translations of literary works from Portuguese-speaking African nations are still very rare. So when Dedalus Books sent me a copy, I lost no time diving in.

First published more than 40 years after Luandino Vieira wrote it in prison, the novel captures the experience of growing up in a musseque (shanty town) on the outskirts of Luanda. Thronged with vibrant characters, from the prostitute Albertina to the delinquent Zito and the alcoholic inventor manqué Mr Augusto, the book bustles with individual stories that surge and jostle against one another as the narrative builds towards its narrator’s – and the nation’s – coming of age when Angola’s War of Independence looms.

As in Juan Tomás Ávila Laurel’s By Night the Mountain Burns, the oral tradition informs and shapes the text, filling each page with a clamour of voices. We quickly learn that the story is a collective endeavour with accounts perpetually contradicted, augmented and challenged by conflicting descriptions or subsequent events. Consequently, the question of truth-telling and the way stories are presented for different audiences are recurring themes, because, as the narrator concedes, ‘no one can tell where the truth ends and the lies begin’.

This is deliciously illustrated when the ebullient boy Zeca tries to reinvent the story of ‘Little Red Riding Hood’ for a local audience. In response to accusations from his peers that he is ‘messing it all up’ by changing the details they were taught in school, he makes an eloquent case for his use of artistic licence:

‘If I tell a story about a girl in a red hood being eaten by a wolf and all that, nobody’s going to be able to make head nor tail of it, now are they? Are there any girls like that here in this country? No. Are there any wolves in the bush here? Of course not! But we’ve got leopards instead and that’s why I tell it like this.’

This sense that stories are fluid, mutable things operates on all levels of the narrative. While the tone of the interconnected stories veers from lyrical to earthy – occasionally within a single paragraph – the chronology of events is complex, with the narration doubling back to fill in a gap or dodging ahead to something years in the future.

According to Patterson’s Translator’s Note, Luandino Vieira took a similar approach to fact and fiction and even language itself in the novel. His childhood memories informed the book – the parish priest Father Neves, who appears in the story, really existed – and the original language of the narrative wove together Portuguese and Kimbundu to represent the way people spoke in Luanda’s shanty towns. Although Patterson decided not to attempt to recreate this blend in English, his melding of registers echoes that hybrid feel cleverly, capturing the disparate experiences and social situations in which the characters must present themselves.

The result is a rich and involving piece of work that takes readers into the heart of the community it portrays. While those of us used to the conventions of the Anglo-European novel may find the fluid chronology and crowd of characters bewildering at points – we meet six in the first paragraph alone – the overall effect when you surrender yourself to the narrative is surprising, delightful and often profoundly moving. By the end of the book, we are nostalgic for a place we have never been.

Our Musseque (Nosso musseque) by José Luandino Vieira, translated from the Portuguese by Robin Patterson (Dedalus, 2015).

The names of certain countries seem bound up with the conflicts that shaped them. For many in the West words such as Bosnia, Sudan and Libya will conjure up the images of death and destruction that flickered on our TV screens throughout recent decades.

The magnitude of these events and the time it takes to translate and distribute books mean that many of the most powerful translated novels still coming out of these countries deal directly with war and its legacy. So we find a harrowing portrait of the expulsion of ethnic Russians from Tajikistan in Andrei Volos’s Hurramabad and a startling child’s-eye view of the Bosnian War in Sasa Stanisic’s How the Soldier Repairs the Gramophone.

However, as I discovered when I read my Angolan choice for this project, not all literature from recent war zones strikes a mournful note.

Published in 2008 by now sadly defunct Aflame Books, Ondjaki’s The Whistler, the slender first novel from the author who made his name on the world literature stage with Good Morning Comrades, brims with joy and belief in rejuvenation.  It chronicles the arrival of a man with a haunting whistle in a sleepy village. Taking up residence in the church, the mysterious visitor fills the neighbourhood with his tunes, which are so beguiling they even charm the pigeons.

Ondjaki has a great eye for the contrary details that create character. The novel bustles with intriguing individuals who loom from the page: from the town oddball with his penchant for defecation in the open air to the put-upon gravedigger who refuses to leave his post at the cemetery despite no-one having died for years.

Zany and dream-like, the narrative almost takes flight into poetry on several occasions. This creates some extraordinary images, although it can make the throughline of the plot hard to follow.

The novel is so exuberant, however, that this hardly matters. As Ondjaki’s letter to his friend poet Ana Paula Tavares (published at the end of this edition) makes clear, his main concern is with creating a powerful impression rather than a conventional story.

He achieves this. The book is imaginative, passionate and extraordinary. And, when considered in the context of the 500,000 people killed during Angola’s 27-year civil war, it’s peculiarly moving too.

The Whistler by Ondjaki (translated from the Portuguese by Richard Bartlett). Aflame Books, 2008