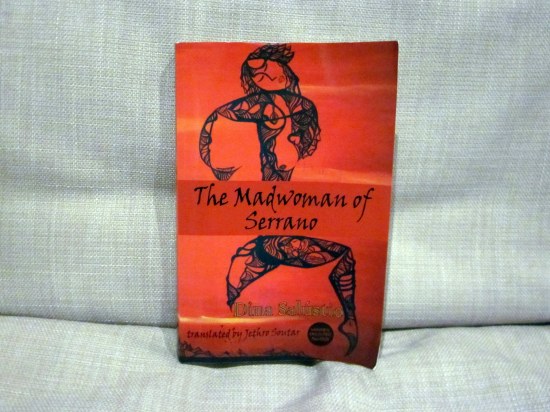 Firsts are a recurring theme on this blog. This month’s book of the month is a case in point. Not only is it the first novel by a female author to be published in Cape Verde, but it is also the first full-length work of fiction by a woman from that nation to be translated into English.

Such publishing events can be both positive and problematic. On one hand, it is exciting to think that the voice of someone from a previously ignored group can now be heard in the world’s most published language; on the other hand, the unreasonable pressure of requiring one novel to carry the weight of an entire community can have a warping effect on our reading. If we’re not careful, we can lumber the writer in question with unfair expectations, forgetting that they are just a person who decided to write a story, and that they probably never thought of themselves as speaking for their gender, nation or ethnic group. A single story, as the Nigerian writer Chimamanda Ngozi Adichie so eloquently argues, never gives a complete picture.

So what to make of this latest first, The Madwoman of Serrano by Dina Salústio, translated from the Portuguese by Jethro Soutar? How to detach it from the political baggage that comes with the accident of its time and place of publication and translation, and take it on its own terms?

At first glance, the novel seems as though it will be relatively straightforward. The premise, though complicated, contains lots of familiar tropes: a traditional village community (Serrano) under threat of development, a young woman forced to confront a difficult past, family secrets, a curse, the tensions between city and country, modern habits and old customs, now and then.

But when you start to read, it quickly becomes clear that the novel does not conform to many of the conventions of its form – or, at least, the anglophone Western version of it.

For one thing, although many of the elements of the story sound familiar, their handling is not. Realism and myth crash together in a strange and jagged interaction that sees the modern, urban world of microwaves, therapy sessions and business deals grate against ancient rites, hearsay and magic. A death certificate shows that a man has been poisoned by strange thoughts; apparently infertile women go to the city for ‘pharmaceuticals’ that turn out not to be quite what they seem; and the mysterious madwoman of the title makes predictions that play out on city streets, as well as in the rural dreamscape of the village.

This stark juxtaposition is reflected on the linguistic level, with translator Jethro Soutar often reaching for words from diverse registers to capture the story’s massive range. At times you can almost feel the narrative straining with the effort of containing all Salústio wants to say, breaking out into a series of surprising digressions, many of which yield some of the book’s most joyful passages. The small section about the unusual role of cats in Serrano, for example, is as pleasing as it is unexpected, while the various explorations of the role of magic in women’s lives put me in mind of another first book by a woman – Mozambican author Paulina Chiziane’s The First Wife, translated into English by David Brookshaw, which I sent to Donald Trump in celebration of World Book Day a few years back.

As with many books that draw on traditions beyond Western literature, the pacing and structure of The Madwoman of Serrano make it a challenging read for those used to the mainstream output of the anglophone publishing industry. Flashbacks nest within flashbacks, repeated memories create an impression of stagnation at points, and, while a number of major events are dealt with in a handful of sentences, it takes central character Filipa several chapters to cook a turkey.

It would require a more knowledgeable reader than me to unpick the threads of all the different influences at work in this book. While the influence of the Western tradition seems evident to me in the shadowy figure of the detective, who appears in the final quarter to tie up many of the loose ends (sometimes rather abruptly), I have no way of knowing what local storytelling techniques may be at work.

As a result, the reading experience felt patchy. At times I seemed to know exactly where I was and what was going on, only for the author to pull the rug out from under my feet with a swerving digression or unexpected turn of events on the following page.  There were numerous episodes that felt rather loosely plotted or underprepared, with catastrophes often arriving out of the blue to scatter characters’ plans.

However, this response may say more about the expectations that my largely Western literary diet has ingrained in me than it does about this book. Steeped in a tradition built on the assumption that human beings have a relatively large degree of control over their safety, health and happiness, I am used to stories that function with a high level of causality, where the course of events can be traced logically, each human action leading to the next. But such neat storytelling may seem naïve, unrealistic or flawed in parts of the world where life is more precarious and where disaster lurks much closer to the surface.

It’s for this reason that it’s important that publishers persist in broadening the kind of text that is available in the world’s most published language and continue to bring out firsts such as this. While The Madwoman of Serrano won’t be an easy or perhaps even a satisfying read for many English speakers, it tugs at the preconceptions we all carry about how books work and what stories do. It may be that this novel has as much to teach us about Western literature and reading habits as it does about writing by women in Cape Verde.

The Madwoman of Serrano (A louca de Serrano) by Dina Salústio, translated from the Portuguese by Jethro Soutar (Dedalus, 2019)