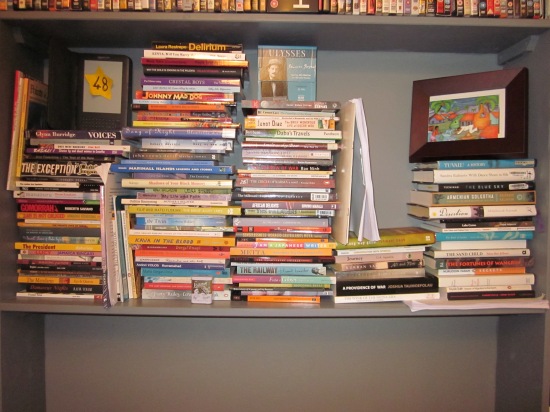 I expected to find getting a book in English by a Maldivian author fairly straightforward. Given the country’s colonial history, I assumed that there would be several things out there and it would just be a case of choosing what to read.

How wrong I was. After weeks of googling around and emailing people, I began to realise that, for some reason, books in English by Maldivian authors were more than a little thin on the ground.

I even tried contacting Robbie Bulloch, the British Deputy High Commissioner to Sri Lanka and the Maldives. It turned out he was one step ahead of me: he’d asked friends in the Maldives for suggestions of translations only the previous week. From their blank looks, he said, it seemed the selection couldn’t be very wide.

He did send a link to a blog by Ibrahim Waheed, a writer who won the National Library of the Maldives’ first ever English Fiction Story Writing Competition in 2007 with what he claimed were the ‘first ever novella-length fictional works published in the English language by a Maldivian author’ (try saying that with a mouthful of marbles). In fact, he’d won not only first prize but also second prize, which made me wonder how many entries the competition had attracted in the first place.

His stories were available to read as pdfs on his site – but they were somewhat short. The search continued.

About this time in the year, I started pestering PhD students. It struck me that the biggest experts on literature from some of the remotest countries on my list might not be thousands of miles away but holed up in university libraries up and down the land. Perhaps they would be able to help?

As it turned out, there weren’t many people doing doctorates on the Maldives. However, I did find one: Mariyam Shiuna, a student exploring ‘Urban violence and disillusionment with democracy in the Maldives’ at the University of London’s School of Oriental and African Studies.

The discovery was a stroke of luck. Not only was Shiuna researching the Maldives, but she was also a Maldivian national. Two days after I emailed her, she came back with details of a classic she had studied at school, which she described as ‘the Maldivian version of Romeo and Juliet or Layla and Majnun‘. In fact, she went one better than simply telling me about it: she had found a free pdf of an English translation of the work online on a website promoting Maldivian heritage. The hunt was at an end.

Starting several generations before the birth of the title characters, Dhon Hiyala and Ali Fulhu – told in this prose version by Abdullah Sadiq – unfolds a great, royal love affair that stretches across the archipelago. Boasting a large cast of characters, a plethora of incidents and a good dose of myth and magic, the narrative takes readers on a tour of the obstacles, complications and frustrations that stand in the way of happiness.

This is a book of new beginnings. I lost track of the number of times that characters abandoned their old homes and habits and struck out to set up a new life on a different island.  From Raaveri Ali – who, having lost his family because of a rival’s curse, gets on a boat for Komandu island, leaving no trace of himself behind on Maroshi ‘even his smell’ – to his son Moosa, who runs off to live in Malé, the idea of clean breaks drives much of the narrative. This can be disconcerting, particularly when we see how quickly old loves and lives are forgotten, but it also gives rise to great ingenuity. The child Moosa, for example, sets himself up as a Koran tutor in the capital, earning the money that will enable him to start afresh. Indeed, the narrative seems to be shaped as much by the nation’s island geography as by its characters’ desires, and moves in fits and starts between one colourful episode and the next.

Through it all, the diligence of its modern-day author and his desire to do justice to this ancient classic is clear. As he demonstrates in his ‘Author’s Preface’, Sadiq feels a great responsibility to render the character of the original raivaru (song version), expressing his desire to write a prose story ‘that was worthy of such inspiration’. As a result, he includes numerous maps, genealogies, notes and explanatory essays in and at the back of the text, as though anxious that not one ounce of significance should be lost on the reader.

In fact, the story is robust enough to stand on its own, not least because the strangeness of some its episodes is one of its strengths. The curses and magic spells that fill the text, and are often described in elaborate detail, are fascinating – at one point the story even becomes a battle of wits between Ali Fulhu and Hawwa Fulhu, as each hurls fanditha (magic) at the other in an effort to come out on top. The scene where Ali Fulhu summons the great king of the Ocean is marvellous too. In addition, the numerous rituals that surround daily life, from the way to prepare for fishing to the words that should be spoken on the birth of a child are, for the most part, self-explanatory.

That said, Western readers will find some episodes hard to empathise with. Dhon Aisa and Moosa’s sanguine reaction to the discovery that their midwife has murdered seven of their babies is surprising, for example, while some of the reasons for characters to act as they do seem opaque – although this could be as much to do with the age of the story as its cultural setting. In addition, Sadiq’s commitment to use plain language and retain the original form gives rise to a few sequences in which very little seems to happen. Sometimes, reading descriptions of the characters talking about how much sugar they should prepare for toddy and their domestic arrangements, it’s hard not to feel that we are being forced to sit through the dressing-room conversations of actors in between their big scenes on stage.

All in all, though, this is a fascinating book – and one quite different from anything I’ve read before. It sparkles with insights and humour drawn from a time and place quite different from our own. If some of the storytelling techniques and actions of the earlier characters have a distancing effect, the love affair between Dhon Hiyala and Ali Fulhu is utterly believable and engrossing when it comes. Enchanting.

Dhon Hiyala and Ali Fulhu by Abdullah Sadiq, translated from the Dhivehi by Fareesha Abdullah and Michael O’Shea © F Abdullah and M O’Shea, 2004