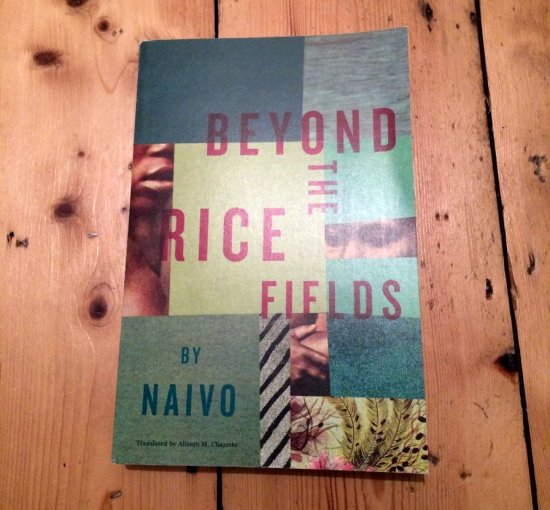 This month’s pick is a special one. About a year ago, I reported that this project had prompted US-based translator Allison M. Charette to travel to Madagascar in search of a book that could become the first complete novel to be translated into and published in English from the island nation. A few weeks ago, I finally got to read it.

Set in the precolonial era when slavery was practised in the nation, Beyond the Rice Fields by Naivo (Naivoharisoa Patrick Ramamonjisoa) presents the intertwined stories of Fara and her father’s slave, Tsito. As the changes of the 19th century buffet their homeland, sending waves of white (vazaha) missionaries and industrialists to challenge the ancient hierarchies – and instigating a violent crackdown on Western practices by the reigning monarchs – the pair must navigate the choppy waters of their personal histories. In so doing, they come to see themselves and each other differently, identifying what is valuable in the society that surrounds them and learning what they must reject.

As with novels such as the (as yet unpublished in English) Ualalapi from Mozambique, unfamiliarity is one of the great joys of this text for anglophone readers. From details such as the importance of the correct arrangement of domestic objects so as to please the ancestors and striking expressions – ‘by my father’s incest’, for example – through to rituals including the fampitaha competition, a dance contest in which female competitors must, among other things, perform while being carried on men’s shoulders, the book is a lavish representation of a remote and strange world.

Sometimes this is alarming. The graphic presentations of the brutal tangena ritual, in which those accused of witchcraft are forced to drink poison and only deemed to have proved their innocence if they manage to regurgitate three bits of skin, and the executions of Christians hurled to their deaths from cliff tops, are startling. Similarly, the description of the graveyard where the corpses of those put to death are consumed by wild dogs makes for troubling reading.

Difference is everywhere apparent on the linguistic level too (credit to Allison M. Charette here). Arresting images abound. We learn, for instance, that Fara’s father ‘smells like bulls moving to summer pastures’, while an unreliable narrator’s story changes colour constantly ‘like a chameleon when children hiss at it’. British readers will be particularly enthralled by the passage in which Tsito visits Chatham, Kent and describes the English port town through fresh eyes:

‘We crossed through a small wood and finally reached the top of the hill, crowned by a structure called Fort Pitt. It was one of several fortifications that the English had built around their industrial center. This one had been converted into a hospital, treating mostly construction-related injuries, which seemed like a bad sign to me. Man pays an ever-increasing cost to rise to power, no?’

These sorts of unfamiliar ways of viewing and capturing human experience make the text richly nourishing, particularly for English-language readers who also write. They show us new ways of imagining, recalling Goethe’s claim about the importance of literary cross-cultural exchange for keeping storytelling vibrant: ‘Left to itself, every literature will exhaust its vitality if it is not refreshed by the interest and contributions of a foreign one.’

Nevertheless, the unfamiliarity of many aspects of the book also poses challenges for English-language readers. Though parts of it are deeply evocative, surprising approaches to pacing and certain storytelling customs, such as announcing the year in which events take place, make some passages feel oddly distant. At times, the text rushes through the deaths of fairly major characters only to linger for pages at a time on the rhythms of the rural day. These differences in weighting can be distracting, but, for readers able to keep an open mind, they are hugely informative too: they reveal what is important both to Naivo and his original readers. In this way, they are perhaps as illuminating about life in Madagascar as the historical events described.

Readers may also struggle to keep tabs on the vast cast of characters that move through the text. The unfamiliar hierarchies of the Malagasy monarchy compound this, making the machinations of various pretenders to power hard to follow.

However, as with the pacing, this is less a problem inherent in the text than a challenge for Western readers to overcome. It is a function of the fact that, by and large, we anglophone booklovers don’t venture into narratives that diverge very far from the models of storytelling we know.

For those who are able to push through this barrier, the rewards are rich: vivid, thought-provoking narration; rich, mind-furnishing imagery; and an insight into a place and time that has hitherto been absent from the English-language literary landscape. Being a nation’s first text to be translated into the world’s most-published language is a heavy burden for any novel to bear, but Beyond the Rice Fields more than stands up to the challenge. It is proof that the anglophone exploration of Malagasy literature is long overdue.

Beyond the Rice Fields (Au-delà des rizières) by Naivo, translated from the French by Allison M. Charette (Restless Books, 2017)