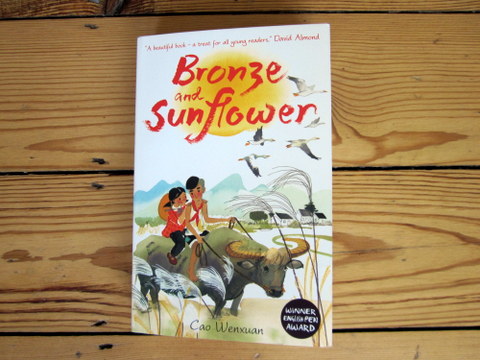 It’s always a pleasure to hear from fellow literary explorers. Since I began my year of reading the world in January 2012, I have come into contact with a large number of people who have embarked on projects to read more widely and discover what stories from other places have to offer.

I’ve heard from people reading their way around continents and language groups, as well as others armchair travelling through time, sampling one text from each year. By far the most popular notion, however, seems to be the idea of travelling the world through children’s books. To date, I know of at least five people who are doing or plan to do this and I’m sure there are many more out there.

So when I heard that author and translator Helen Wang (one of the many kind people who shared their expertise with me while I was researching my book) had translated a children’s story by the Chinese author Cao Wenxuan, I was intrigued to read it.

My interest grew when I read a little more about Cao and the story, Bronze and Sunflower, in the notes at the back of the book. According to them, Cao is often described as China’s Hans Christian Andersen. What’s more, the story was inspired by the childhood experience of a friend of his during the Cultural Revolution, but didn’t fall into place for a long time until Cao had a vision of the Chinese characters for ‘Bronze’ and ‘Sunflower’ one Chinese New Year.

The result is a moving account of two children brought together by loneliness, and bound to each other through familial affection and the determination to survive. Sunflower is the daughter of an artist banished to do hard labour at a rural cadre school and Bronze is the mute son of impoverished villagers who live nearby. After Sunflower’s father dies, Bronze persuades his parents to take her in and the family devotes itself to giving her a decent life in the face of extreme hardship that threatens repeatedly to destroy them.

Bleak though the premise may sound, the book is in fact extraordinarily beautiful. In addition to the touching affection Cao creates between the children and the other family members, his (and Wang’s) vivid, lyrical and sometimes startling descriptions shimmer from the page. From the way Sunflower’s father’s ‘cardboard folder flapped like the wings of a giant bird and released his paintings to the sky’ to the plague of locusts ‘swirling and thrashing like an army of screaming black demons, their mouths gaping, their tongues flicking’, the book is a masterclass in the pictures words can paint.

The story is engrossing too. With Bronze and Sunflower battling to survive and thrive, the stakes could not be higher. As a result, Cao is able to weave in some sophisticated observations about the realities of poverty. He also powerfully portrays the experience of living in a place where services like health care and education are seen as privileges and not rights – thought-provoking stuff for children in many parts of the English-speaking world, who may be more used to grumbling about than begging to go to school.

Gender roles are a little problematic in the book: although Sunflower is full of gumption, she almost always blunders and has to be rescued from her scrapes by the more ingenious Bronze. The situation is rarely reversed, although Sunflower does teach Bronze to read and write, making for one of the most triumphant moments of the book, when Bronze silences the sneers of a crowd by stepping forward and painting his name on a wall.

In addition, it is slightly difficult to know what age range of children would get most out of the book. The publisher, Walker Books, recommends it for children aged nine and over, and says that it can be read independently by confident readers or read aloud by parents, but certain aspects of it feel better suited to children of other ages. While the narrative’s somewhat graphic descriptions of violence and suffering, and sophisticated vocabulary would test most nine-year-olds, the somewhat naive, innocent tone of the story makes it feel more appropriate for younger children.

From conversations I’ve had with Wang, I understand that this is a common challenge when it comes to bringing Chinese children’s literature into English – an interesting insight, perhaps, into the different expectations of childhood in Chinese and Western culture.

All the same, this is an absorbing and beguiling book. Despite being nearly 25 years outside the target readership age, I found myself gripped by many of its episodes and moved by its clear, elegant and often beautiful descriptions. However old you are, this book will expand your horizons – whether you’re engaged in a reading quest or not.

Bronze and Sunflower by Cao Wenxuan, translated from the Chinese by Helen Wang (Walker Books, 2015)