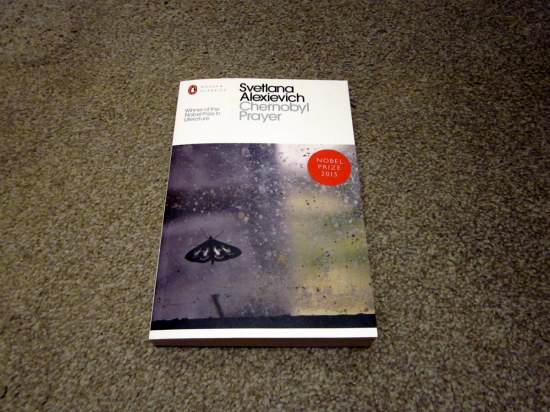 The second translated book I am sending to a stranger this year goes to someone from a group of people who kept me going during my 2012 quest to read a book from every country in the world. The project was a wonderful voyage of discovery. However, reading and blogging about a book every 1.87 days for 12 months when you’re working five days a week can be tiring and sometimes lonely.

As such, I came to depend on the support of an initially small but growing band of people who helped to cheer me on. These were the folk who followed the project from the early days and let me know through comments, likes, tweets and personal messages that they appreciated what I was trying to do. Many was the morning when I stumbled bleary-eyed to my computer and found welcome words of encouragement from someone I didn’t know waiting to spur me on.

Several of these long-term followers left comments on the Postcards from my bookshelf project post. All of them deserved a book. However, in the end, I decided to choose simonlitton (or Simon, as I’ll call him from now on) because his was one of the names I remembered cropping up several times in the early months of my year of reading the world, in the days when each comment did a huge amount to boost my determination and confidence.

Simon’s Postcard entry didn’t give me much to go on when it came to selecting a book he might like:

I loved AYORTW and would definitely be interested in reading something you sent. My tastes are pretty broad but I’m especially interested in anything which opens a window on another culture. I read fairly regularly in French and Italian too, which gives me more options.

Luckily, however, his name linked to his blog. And there I found a connection to his Goodreads page – a goldmine of information about his reading habits.

As he claims, Simon has extremely broad taste in books. I was delighted to see a good number of African works listed among the nearly 400 titles he has reviewed on the site, along with a range of classics, and a glut of contemporary bestsellers and lesser-knowns, including a healthy spread of translations, as well as the French and Italian works he mentioned. There was also an impressive array of non-fiction books, along with a strong showing of sci-fi and fantasy titles.

What struck me most of all, however, was Simon’s approach to star ratings. A number of internationally acclaimed texts met with relatively short shrift at his hands. Leo Tolstoy’s Anna Karenina and War and Peace both scored a middling three stars, as did Chinua Achebe’s Things Fall Apart. Here, clearly, was not only an adventurous reader, but a bold and independent one too – a person who liked to make up his own mind rather than being led by hype.

I thought long and hard about what to choose for Simon. In the process, I found myself returning repeatedly to what he had said in his comment about books that open windows on other cultures.

Many of the titles I have read during and since my 2012 project could be said to open up insights in this way. Often, they are among the best-written and most compelling books to cross my desk.

This is no coincidence. In my experience, enabling readers to understand societies different from their own requires great storytelling: we need that narrative pull to sweep us over the inevitable bumps and obstacles that arise when we venture into ways of looking at the world that diverge from our own.

Consequently, I had a bewildering wealth of beautifully written works in mind. I might have chosen Burmese writer Nu Nu Yi’s Smile as They Bow with its engrossing depiction of the life of a transgender temple dancer. I could have plumped for Jamil Ahmed’s exquisite The Wandering Falcon, my choice for Pakistan. Or Juan Tomás Ávila Laurel’s By Night the Mountain Burns – only the second novel from Equatorial Guinea ever to be translated and published in English (the first, by the way, Donato Ndongo’s Shadows of your Black Memory, is also well worth a read).

In the end, however, one book kept nagging at me. Less a window on a culture, it is more like a door blasted open to reveal a post-culture – a portrait of a society destroyed by a catastrophic event that many of us might like to imagine is remote but which affects us all (and which will be evident in the world hundreds of thousands of years after pretty much everything else we know now is gone). A sort of real-life sci-fi, if such a thing were possible.

The book I’m talking about is Chernobyl Prayer by the Belarusian Nobel laureate Svetlana Alexievich. I read it and posted about it last year and it has stayed with me ever since. Harrowing, human, insightful and mind-scrambling, it is one of the most powerful texts I’ve ever encountered.

But of course, Simon, you’ll have to make up your own mind. Thank you.

If you’d like a chance to receive a postcard from my bookshelf, visit the project post and leave a comment telling me a bit about you and what you like to read. The next recipient will be announced on March 15.