This has been a particularly exciting month for me. As Literary Explorer in Residence of the Cheltenham Literature Festival for the second year running, I got to spend nine days in conversation with a fascinating array of writers and storytellers from all over the world.

There were too many wonderful events to list here. However, some personal highlights included an hour-long discussion with Japanese sensation Mieko Kawakami (facilitated by the brilliant interpreter Bethan Jones), my Read the World interview with Kenyan author and activist Nanjala Nyabola, and talking about writing the refugee experience with Dutch writer Rodaan Al Galidi and Caryl Lewis, author of Martha, Jack and Shanco, translated from the Welsh by Gwen Davies, which was the final book of my year of reading the world back in 2012.

Then, on the last day of the festival, I chaired a discussion between two fabulous novelists, including the author of my latest Book of the month. Guest curated by bestselling US novelist Celeste Ng, whose latest novel All Our Missing Hearts presents a bleak vision of an America in which discrimination against those with Chinese heritage is enshrined in law, the theme of the session was dystopian fiction around the world. Joining me to discuss this fascinating topic were US debut novelist Jessamine Chan, whose compelling The School for Good Mothers has already been named by The New Yorker as one of the best books of 2022 so far, and Kristín Ómarsdóttir author of Swanfolk, translated from the Icelandic by Vala Thorodds.

Set in a country that no longer exists, the novel follows Elísabet, an employee of the Special Unit of the Ministry of the Interior, whose life is thrown into chaos when she encounters a hybrid species of swan women living in the woods near her home. Caught between the tightly controlled existence required by her employer and the weird excesses and demands of creatures that defy the logic she has been taught to believe, Elísabet must find a way to bridge the gulf between these two worlds.

As this summary suggests, there is a mythic and even surreal quality to the narrative. In our discussion, Ómarsdóttir was open about the fact that she draws heavily on Icelandic fairy tales and legends in her writing, and this shows. Not only are the swanfolk themselves – human from the waist up and avian from the hips down – like something out of mythology, but the mysterious nature of the world in which we find ourselves and the lack of certainty over what is real and how all this came to be lend the book a dreamlike feel.

As readers, the ground is constantly shifting under our feet. The double dystopia that unfolds before us – Elísabet’s stifling daily existence and the swan people’s need to live secretly for fear of persecution – plays by rules that are never fully explained. Instead, hints are dropped. We learn that Elísabet is under constant surveillance, beholden to her constantly shifting employee rating and afraid of being promoted. Similarly, the swan people explain little of their culture and mores, but veer between violence and tenderness with alarming unpredictability.

Sometimes, the result is very funny, particularly when this subversion of expectations takes place on the linguistic level. Ómarsdóttir and Thorodds crash together registers and concepts in a way that sometimes made me laugh with surprise. Humour in this book, though, comes with a health warning. For much of it, Elísabet is engaged in writing a report on the city’s stand-up comedians. Yet when the comedians finally appear, they give a performance that is anything but funny. (‘I’m a very serious person,’ said Ómarsdóttir when I asked her about this, with a twinkle in her eye.)

There are also moments of extreme consternation, many of them centring around the question of legacy and motherhood. The swanfolk, whose egg yield has dwindled to almost nothing, fear extinction – a plight that put me in mind of Jacqueline Harpman’s dystopian tour de force I Who Have Never Known Men, translated by Ros Schwartz, and also made for a brilliant discussion with Jessamine Chan, whose The School for Good Mothers presents a nightmare US in which parents found to be in breach of their responsibilities are sent to re-education camps.

Yet in Swanfolk even a reading that posits the book as an investigation of motherhood is not left to stand unchallenged: when an egg is delivered into Elísabet’s safekeeping at the ministry, her colleagues cast doubt on its origins, intimating that the swan people may be all in her mind.

As a result, we are constantly second-guessing the story and ourselves. Words become unmoored from the meanings we are used to giving them. Like Elísabet, we begin to doubt our instincts and lose the power to articulate our thoughts. Observations glimmer in the narrative and wriggle out of reach. And lest we are tempted to settle on anything concrete, the book admonishes us: ‘Books that search for a conclusion and closure are at risk of disappointing their readers. Conclusions dampen the impulse to innovate and to imagine.’

Perhaps the most telling insight into what’s going on at the heart of this complex, troubling and surprising read came during my discussion with its author. Ómarsdóttir revealed that, in her view, modern society is like a spaceship speeding away from reality. It could be that we need storytelling like this to bring us back down to Earth. 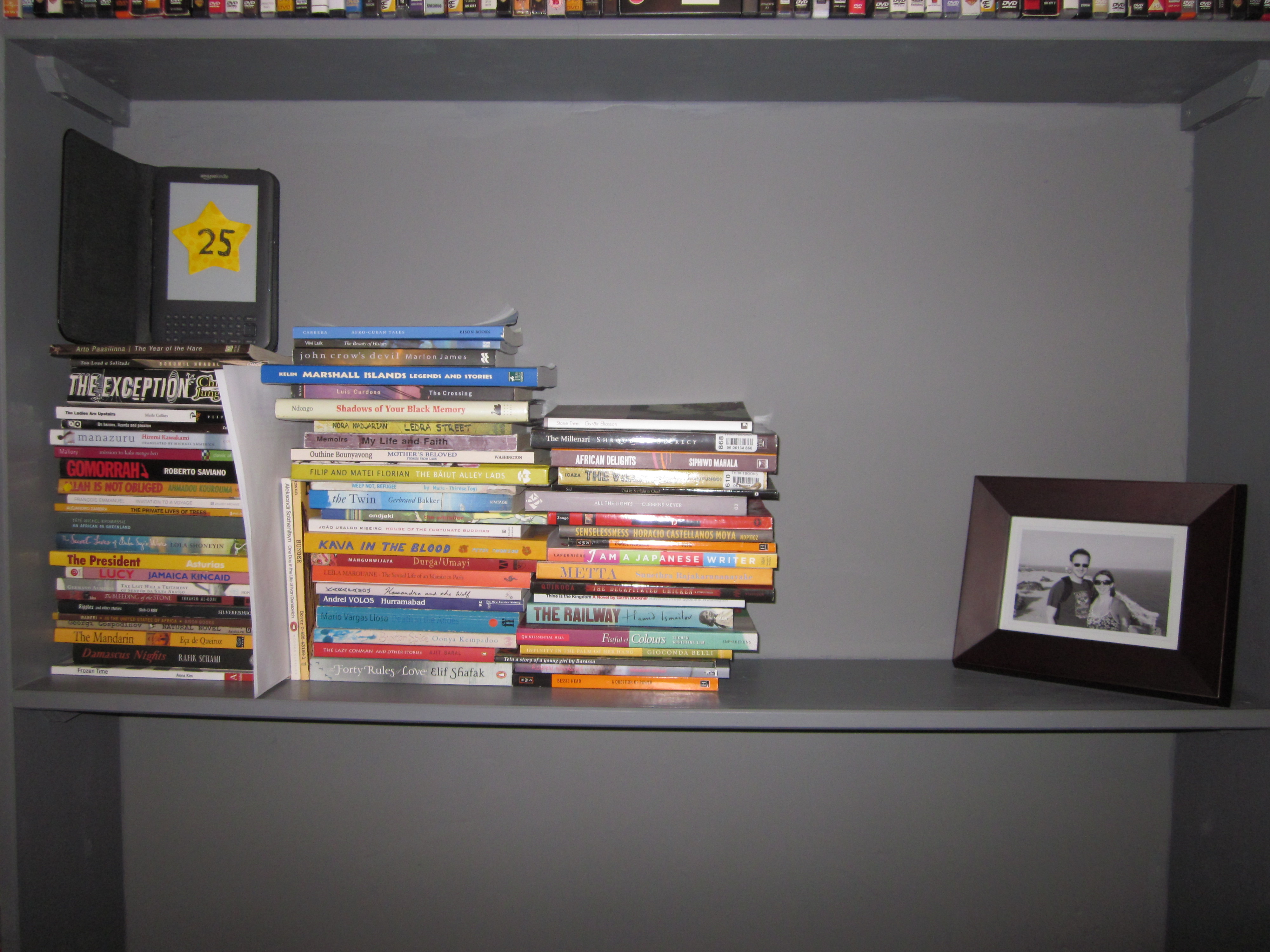 For so small a country, Iceland is an impressive player on the global literary stage. According to Iceland Pulse, there were 757 books published on the island in 2011, among them 55 new works of fiction by Icelandic authors. Not bad for a nation with a population of less than 320,000.

Many of these authors don’t make it into English, however there has been a recent drive to translate some of the island’s most celebrated and successful writers, with crime authors such as Arnaldur Indriðason doing well overseas. Gyrðir Elíasson caught my eye because he has scooped several of the big national literary prizes. I liked the sound of his work and wanted to take a closer look.

Often centring around people taking a break from normal life to read, write, think, paint or simply be, Elíasson’s very short stories trace the unseen connections that link us to the world around us and reveal how tiny shifts in perspective can change the course of a life. There is the bird painter from Boston who encounters a gull and decides to give up his career, the music college vice principal who ducks out of a meeting to run away to the States, and the holidaymaker who discovers the disintegration of his marriage courtesy of an automated phone service message in a language he does not understand.

Other books stalk through the pages of this collection. Whether the pieces focus on two translators living side by side as they render their own versions of different books by John Steinbeck, as in ‘The House of Two Stories’, or on the obsessive bibliophile walled in from normal life by his dependency on books in ‘Book after Book’, reading and writing often form a large part of the action of these tales. Literature also informs Elíasson’s descriptions, with several of his depictions of landscape drawing on associations from the world of books: ‘Saksun […] would have been the perfect setting if Keats, Shelley and Byron had ever needed a retirement home,’ he writes in ‘Watershed’.

Though many of the stories feature characters grappling with the everyday problems of relationships, careers and meeting the expectations of others, they are by no means realist in style. Elíasson delights in delving into the uncanny, with many of the pieces set in eerie guesthouses and lonely holiday homes that owe more than a little to the Gothic tradition. Some, like ‘The Car Wreck’ and ‘The Silver Nose’, describe ghastly, otherworldly encounters, while others, such as ‘The Dream Glasses’, contain moments of profound beauty, all of which draw on the seductive pull of the mysterious and unexplained.

When it works, this creates extraordinarily powerful and wistful pieces. However, there are several stories that dissolve into nothingness, leaving a flat aftertaste. In addition, the large number of tales in the collection means that reading them back-to-back shows up a few tricks being played several times, necessarily blunting their effect second or third time round.

As a whole, though, this was a beautiful, eerie and evocative collection. The stories, like pieces of driftwood on a remote beach, seem to be fragments of other times and places, worn smooth by the action of Elíasson’s imagination. An intriguing and memorable work.