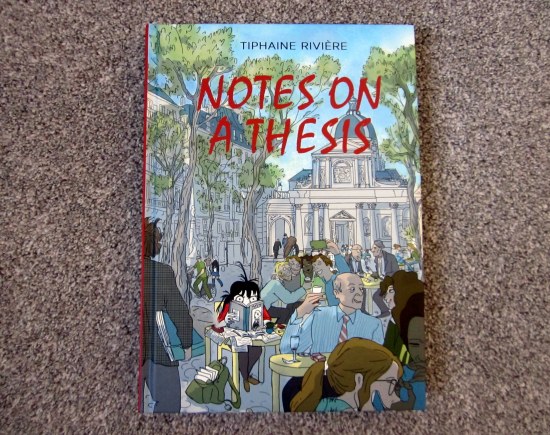 In my previous post on book clubs, I mentioned that international literary prizes can often be a good source of reading suggestions. February’s Book of the month is a neat demonstration of that. Indeed, in this case a literary award encouraged me to discover not just an author I’d never read before, but a whole new genre.

Francesca Barrie’s translation of Tiphaine Rivière’s Carnets de thèse (Notes on a Thesis to you and me) is one of six books on the inaugural shortlist of the TA First Translation Prize. Set up and endowed by writer, editor and translator Daniel Hahn, the annual award recognises outstanding debut translations published in the UK, with the first winner announced tomorrow (March 1).

The award is unusual in that, unlike most comparable honours, the original author of the book does not receive part of the prize money. Instead, the  credit goes entirely to the person who rewrote their words in English.

The presence of Notes on a Thesis on the shortlist marks the award out in another way too. It is rare to see a graphic novel in contention for a prize like this. Although the art form is taken very seriously in many parts of the globe, books that use pictures to tell stories tend not to get much attention from the English-speaking literary establishment. As a result, they don’t come onto the radars of many anglophone readers.

This was certainly true for me. Being a wordy person with relatively poor visual sense, I’ve never really ventured into the genre. Had it not been for the presence of Notes on a Thesis on the TAFTP shortlist, the work would almost certainly have passed me by.

However, when I looked it up, the premise struck me as irresistible. Told through the eyes of a young woman, Jeanne, who gets accepted to do a PhD in Paris, the book sets out to satirise the university system. Sparked off by a blog Rivière started after three years working on a thesis herself, it is, according to the blurb on the back, ‘a wickedly funny graphic novel about academic life, for anyone who’s ever missed a deadline.’

I snapped up a copy and took it with me to the University of Kent, where, in between seeing students (many of them working on PhDs) in my capacity as a Royal Literary Fund fellow, I quickly fell under the spell of Rivière’s craft.

‘Wickedly funny’ does not begin to cover it. This is a book that will have readers laughing out loud and rushing to share the jokes. The observations are precise and devastating. A range of killer characters comes to life in a handful of sentences – from the secretary with ‘a secret tactic: feigning gross incompetence to wear down her adversaries, until they eventually stop asking her to do anything at all’ to the PhD supervisor who prescribes reading the complete works of Schopenhauer as a way of getting rid of his charge.

One of the great joys of the book is the way Rivière’s illustrations not only portray but also advance the story. Take this series of ID card snapshots revealing the toll Jeanne’s thesis takes on her over the course of four years.

Or this spread capturing the experience of giving a paper and then waiting nervously for questions at the end. 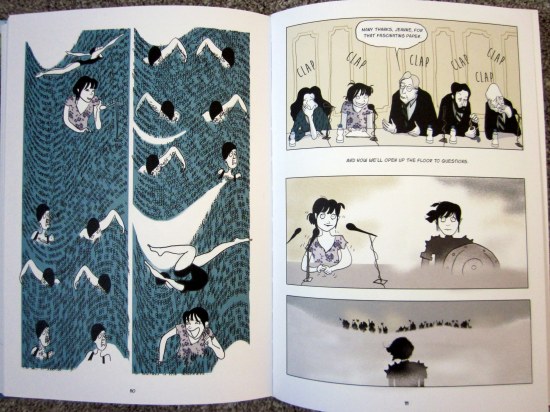 The publisher’s decision to market Notes on a Thesis at the academic community is understandable, but people from all walks of life will find much to recognise and chuckle at here. Whether it’s the excruciating family Christmas where well-meaning relatives unwittingly rip apart your ambitions, or the irrational, middle-of-the-night heart-to-heart with the partner who has been forced to ride the roller-coaster of your dreams with you, the pages brim with telling and hilarious details.

Although books about writing are common, it is unusual to see the business of trying to put pen to paper captured in pictures. Notes on a Thesis is both a joy and a surprise, richly deserving of literary recognition even as it pokes fun at much of the paraphernalia associated with that world.

If this is an example of what graphic novels have to offer, I have got a lot to learn.

Notes on a Thesis (Carnets de thèse) by Tiphaine Rivière, translated from the French by Francesca Barrie (Jonathan Cape, 2016)