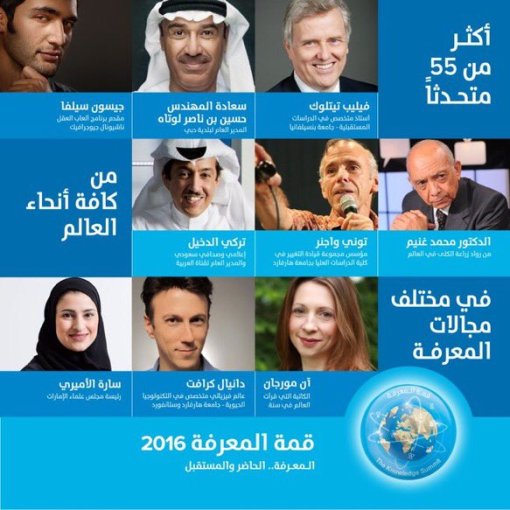 This week I had the great honour of being one of the speakers at the Knowledge Summit in Dubai. It was the third annual conference organised by the Mohammed Bin Rashid Al Maktoum Foundation (MBRF) to champion the sharing of expertise across borders. I was one of more than 60 speakers brought together from all over the planet to debate a range of issues, challenges and opportunities facing the world today.

The subject of my panel was a tough one: ‘Future Foresight – Against Ideological Extremism’. Alongside presentations from several other distinguished speakers – including Ambassador Theodore Kattouf and Dr Jawad Anani, the Jordanian deputy prime minister for economic affairs – I spoke about the potential of reading and storytelling to build bridges across ideological divides and to help us recognise and celebrate our common humanity.

As it turned out, I was not the only speaker at the conference extolling the virtues of books. On the second day, in the hour or so before I had to leave for the airport, I managed to attend a session on ‘The future of reading in the Arab world’. This discussion saw speakers including Dr Najoua Ghriss, professor at the Higher Institute of Education and Continuous Training in Tunisia, and His Excellency Jamal Bin Huwaireb, managing director of the MBRF and cultural adviser to the government of Dubai, presenting the results of the Arab Reading Index 2016.

Driven by the foundation’s belief in reading as a great tool for cultural exchange and enlightenment, the ARI set out to test a rather shocking claim: that Arabic speakers read for an average of just six minutes a year. Incredulous that this could be the case, the MBRF in partnership with the UNDP carried out the most wide-reaching survey of reading habits the Arab world has ever seen.

Around 148,000 people responded across 22 countries. The results showed a clear challenge to the common assumption that, as Jamal Bin Huwaireb said publishing professionals had often told him at international book fairs, ‘Arabs don’t read.’ In fact, according to the ARI, Arabic speakers read for an average of 35 hours a year, with people in Egypt reading for 64 hours annually, as compared to countries with much lower reading rates, like Somalia, Djibouti and the Comoros.

The revelations didn’t stop there. Exploring the types and format of reading material popular among respondents, the survey showed that social media and news websites account for a sizeable chunk of the written words Arabic-language readers consume and that ebooks win out over print volumes.

Jamal Bin Huwaireb put this last point down to the low print runs and the relatively high cost of physical books in the region. He appealed to publishers to do more to make books accessible for all readers.

‘Publishing houses are not performing their responsibility,’ he said. ‘If not enough copies of a book are published, and we don’t increase those [numbers] and make the price suitable, it means that the coverage of a book is not enough.’

All the panellists agreed that, although 35 hours of reading was in a different league to 6 minutes a year, there was still a long way to go. For Dr Ghriss, some of the challenges ahead involved finding ways to support families in instilling reading as a habit in children and ensuring that the quality of the texts people consume is good. She hoped that further analysis of the data would help her and colleagues to develop suitable strategies, in addition to the initiatives already under way, among them new laws to help encouraging reading in schools and in the workplace, and the development of the Dubai E-library.

This was important, she said, because reading was a vital tool for the social and economic development of nations. ‘We can’t envision a community or society acquiring knowledge without being a reading community,’ she said.

I left for the airport feeling encouraged. At a time of funding cuts for many arts organisations closer to home, it was inspiring to see a government putting such emphasis on the importance of the written word and its potential to advance and enrich people’s lives.

As I know well from my year of reading the world and from excellent blogs such as Arabic Literature (in English), the Arabic language has a wealth of wonderful homegrown stories. I hope initiatives such as ARI mean that even more readers discover them.

Would you like to receive a book chosen by me in 2017? Enter Postcards from my bookshelf now!