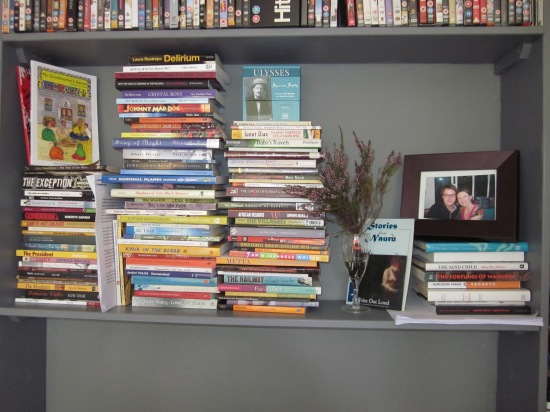 I was running out of ideas for the FSM. I had been in touch with a whole range of Pacific Island literature experts and academics based at universities in Hawaii, Australia, New Zealand and Guam. I had emailed cultural associations, community radio stations and local celebrities. And I had left messages on every sort of blog to do with Oceania that I could find.

Everyone who got back to me said the same thing: if I was looking for poetry, there would be no problem. There were lots of Micronesian poets knocking around. There was even a Micronesian Poets Club. And of course Emelihter Kihleng represented the country at Poetry Parnassus in London this summer.

But as for prose. Well… from a nation that size I’d be very lucky to find anything at all.

Beginning to despair, I looked Emelihter Kihleng up on Facebook. Perhaps she might be able to suggest something?

Kihleng very kindly replied: there was a creative history of the island of Pohnpei by Pohnpeian Luelen Bernart. It was out of print, but if I dug around online I should be able to find a copy.

I looked the book up. My heart sank slightly when I found that it had been published posthumously in 1977, two years before the formation of FSM’s constitutional government and nine years before the country declared independence from the US. Could it really count as literature from FSM?

However, as I read more about village chief Bernart, who died in 1946, having grown up before the island came under foreign control, I began to feel that there might be a case for relaxing my rule that literature must have been written since the foundation of the country in this instance – particularly as, as an island nation, the boundaries of Pohnpei have in one sense not shifted for hundreds of years. Besides, I was intrigued about what was inside.

Containing spells, songs, legends, lists of plants, tools and star names, and even a potted history of the deaths of the apostles, The Book of Luelen sets out to tell the story of life on Pohnpei from the dawn of creation up until the time of writing. Part mythology, part history and part personal testimony, with a smattering of biblical tropes and stylistic techniques thrown in for good measure, the work is one of the most eclectic and ambitious pieces of prose going.

Bernart’s writing is richest in its handling of lore and mythology. Whether he is describing the underworld beneath the sea, the second heaven or ‘place for people who had poor voices in singing’, or the development of civilization on the land in between, the author is engaging and often surprising. We hear of the battles between the Arem (humans) and the Liat (cannibals), the story of the magic man Taimuan who drops his defects off on surrounding islands in order to trick a woman into marrying him, and the spirit who travels the world and writes a song about his adventures, not to mention a whole host of recipes, tips and explanations for why certain plants, rituals and ceremonies sprang up.

Exhilarating though the sheer scope of the work is, it can also be problematic. Bernart, who worked on the book for 12 years and dictated the closing chapters to his daughters shortly before his death, clearly feels a pressure to get as much down as he can, sometimes at the expense of narrative coherence. As he explains in his preface, the point of the exercise as he sees it is to get the information written in the first place – ‘let those who know hear and correct this later’, he writes.

This impatience manifests itself in a number of ways. From repeated assertions that there is not enough time to explain certain concepts in the text, to pat generalisations that ‘the people of this age are better than those of olden times’, which the author seems to expect us to take on trust, Bernart bustles us along with a briskness that can make for rather bewildering reading. In addition, the sudden introduction of historical dates and statistics when the narrative comes to the events of the 19th century feels rather startling.

It is perhaps only when we understand the context of the work that such anxious haste makes sense. When he penned the book, Bernart was not only up against his own mortality but also the fact that, apart from translations of The Bible and a few religious tracts, no stories had been written in his language (he spoke a Kiti dialect). Using a written system that had itself been developed by American missionaries in the 1850s, his book was the first complete record of the nation’s history according to a Pohnpeian. It was a political act as much as an act of conservation.

And the importance of that act showed: although the work was only formally published in 1977, it was circulated in numerous manuscript versions around the island after Bernart’s death. Even in this edition, with numerous forewords, introductions and notes by Western academics (who even published a supplementary volume of annotations to convey their full interpretation of the text to the English-language reader) the passion of the writer to tell his story his way shines through. In many ways it is an attempt to contain not just a nation but also an entire universe. Marvellous.

The Book of Luelen by Luelen Bernart, translated from the Pohnpeian dialect and edited by John Fishcer, Saul Riesenberg and Marjorie Whiting (Australian National University Press, 1977)

PALAU APPEAL: Do you know anyone who might be able to help me find a book or prose manuscript from Palau, the final Pacific Island nation to solve on my list? Any ideas of writers, bloggers, friends, relatives or other contacts in the region would be brilliant. Leave a comment and let me know…