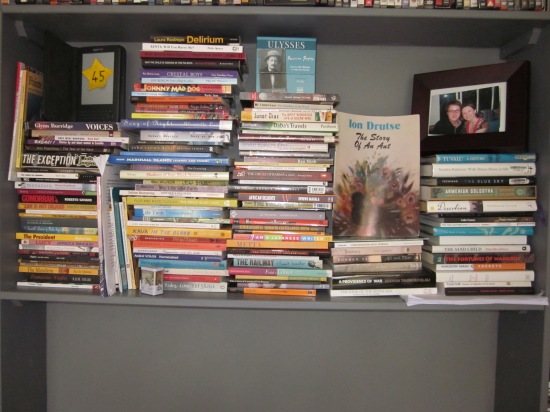 From very early on in the year, this country of around 21,000 people spread over 250 islands, 500 miles east of the Philippines distinguished itself as the most difficult Pacific island nation to find books from. Every other literary globetrotter I’ve heard of has struggled to find a Palauan story, with many people resorting to anthropological works and histories by Western academics in the absence of anything by writers from the place.

My own experience bore this out. While I was able to find people to contact for recommendations from all the other Pacific nations – no matter how tricky the books ended up being to track down – it was difficult to know where to start with Palau. The few emails I fired off to people in the country disappeared into the ether without a trace. And any experts on the region I contacted simply said Palau would be difficult and left it at that. Things were starting to get desperate.

And then my resourceful colleague – who, by the way, I’m beginning to suspect is some kind of secret agent, so uncanny is his ability to find leads in the remotest of places – sent me a link to a Palauan writers Yahoo group. Judging by the absence of recent activity on the site, it might well have turned out to be another dead-end. However, there was an email address for the list owner. And so, not holding out much hope, I sent a message to it.

After about a week, a detailed email came back from Susan Kloulechad, a Canadian citizen who is married to a Palauan, with whom she has three children, and has lived in the country for nearly 20 years. She suggested several organisations and people to contact on the islands before mentioning that she had a couple of unpublished manuscripts of her own. One in particular, Spirits’ Tides, caught my interest. And so, judging that Kloulechad’s long association with the nation qualified her work to be considered as Palauan, I asked her if she would let me read it.

Moving back and forth between New York and the imaginary archipelago of Lekes, which Kloulechad says is a fictional version of Palau (the name is taken from a place in her husband’s village), the novel tells the fraught love story of Jonathan C Durston Jr and Micronesian girl Rur. Worlds apart in terms of their lifestyles and experiences, the two are really spirit companions who were separated when they entered time and were born at opposite ends of the Earth. They meet again when multi-millionaire tycoon Jonathan crashes his plane in the sea by one of Lekes’ deserted islands and Rur helps save his life. An attraction develops quickly between the pair, but, with so much separating them, a relationship between these star-crossed lovers seems impossible.

Jonathan’s crash-landing in the heart of Lekes provides Kloulechad with a great opportunity to reveal Micronesian culture to the reader. With Rur as a guide, we learn about everything from how to catch a coconut crab to the region’s strong family values and wedding rituals, as well as some of its folk tales. I was particularly pleased to come across the story of the race between the fish and the wily crab, which I read first in Marshall Islands Legends and Stories and now feels like an old friend.

The author balances this with a great evocation of New York City in winter, as seen through Rur’s eyes. Reading it made me deeply nostalgic for strolling through Central Park in the snow and my fingers itched to get online and book a flight – testament to how well Kloulechad captures the place.

There are some good touches of humour in the narrative too. Moments such as Rur’s mischievous pretence that her ability to start fires derives from island magic, rather than the lighter in her back pocket, and her fabrication of a story about the extent of Jonathan’s injuries to help them get a flight more quickly bring the novel alive.

On the downside, the balance slips during some of the debates between Jonathan and Rur so that the book often feels more like a two-dimensional manifesto for ‘the value of a simple life’ in Micronesia than the dramatisation of the meeting of two worlds. At times Rur seems to be hectoring not only Jonathan, but also the Westerner the author seems to envisage reading the book.

In addition, there are problems with the plot: the pact between scheming girlfriend Caroline and Jonathan’s father to entrap the hero in an engagement stretches credibility, while Jonathan’s forging ahead with plans for a marriage he doesn’t want and his reluctance to discover the identity of the employees embezzling funds from his company feel more like a decisions required by Kloulechad to keep the tension going rather than choices the protagonist would make. I was also uncomfortable with the use of Caroline’s desire to work once she’d had children as a way of vilifying her.

Nevertheless, as a light, romantic novel the book has potential. The raw subject matter is rich and Kloulechad’s skill in evoking places makes for some lovely moments. With a bit of structural underpinning and some fine tuning of motivations, it could be a very enjoyable read. And if it finds a publisher, it will also – as far as I can find out – be the first Palauan novel to make it into print. Now that’s something I’d love to see.

The Rest of the World vote closes on Friday 30 November at 23.59 (UK time). Make sure you have your say!