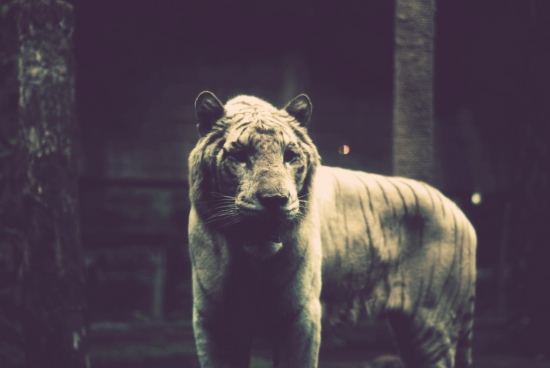 This was a recommendation from friend and fellow writer, Trilby Kent. She mentioned a few weeks ago that she had just discovered Indonesian author Eka Kurniawan and highly recommended his work.

Kent isn’t the only person to have been wowed by Kurniawan. His latest novel to be translated into English, Man Tiger, recently received a glowing review in the UK Guardian, which described it as a Javanese subversion of the crime fiction genre. Furthermore, when I clicked open my e-copy, I was confronted by another endorsement in the form of an effusive introduction by celebrated scholar Benedict Anderson, who died earlier this month. Despite describing the English translation of the title as ‘slightly awkward’, he was adamant that Kurniawan was Indonesia’s ‘most original living writer of novels and short stories’.

I turned to page one with a sinking heart. Could any novel really live up to such a fanfare?

I’m pleased to report that Man Tiger does so with ease. Opening with the savage murder of an ageing villager by the young man, Margio, who has been dating his daughter, this novel pours forth a stream of delights. As we follow the unfolding of the narrative, watching Kurniawan peel back layer after layer of grudges, half-remembered incidents and surprising events, we meet many characters so vivid and robust that they seem at times to lean from the pages and hoick us bodily into their concerns. There is the major who is convinced that the piece of ground he has been honoured with in the heroes’ cemetery is simply an invitation to die quickly and the elderly woman who would rather poison herself by eating the soil of her land than allow her avaricious children to get their hands on her wealth.

The references to crime fiction that several English-language reviewers have made are understandable, but potentially a little misleading. While the intricate and deftly tuned plot runs like clockwork throughout, keeping us guessing until the last page – not about who did what (we know that in the first sentence), but about why things happened the way they did – this book is so much more than a mere twist on a familiar genre. It brings in huge amounts of other things: myth, oral storytelling techniques and a brand of the fantastic that many will no doubt describe as ‘magical realism’, but which is quite unlike anything else I have read in that category.

The writing reflects the novel’s hybrid nature, shifting between registers with breathtaking dexterity. Moments of brutal matter-of-factness – gritty as anything you’ll find in the pages of Larsson or Nesbø – give way to bathos, flights of lyricism and a beauty that is almost painful.

Indeed, though there are one or two oddities in the text (some of which may of course reflect the original), translator Labodalih Sembiring deserves praise for his part in this extraordinary book. Gems such as ‘the night tumbled upon them, buoying the stars and hanging up a severed moon’, and ‘he gave up on cutting hair, and instead trimmed away at his own soul, snip by snip’ make the text glitter. This is particularly worth noting when you reflect that, as Anderson explains in his introduction, Kurniawan’s work presents great challenges for translators because it ‘includes contemporary coinages as well as many obscure words, still used in remote villages, but absent in present-day urban-centred dictionaries’.

There’s so much more to say. I wanted to tell you about Kurniawan’s extraordinary eye for detail, which brings the novel’s lush settings close enough to touch. I’d love to have written at length about his uncanny understanding of why we do what we do, and the way he portrays human ugliness, vulnerability and tenderness in all their fullness. I’ve got a whole list here of moments that had me chuckling and insights that made me nod in recognition.

But instead of turning this blog post into a dissertation, let me suggest this: give yourself a treat and buy this book or request it from your library. Then you can discover all this and much more for yourself. I can’t think of a better way to start 2016 than in the company of such thrilling writing. Happy New Year.