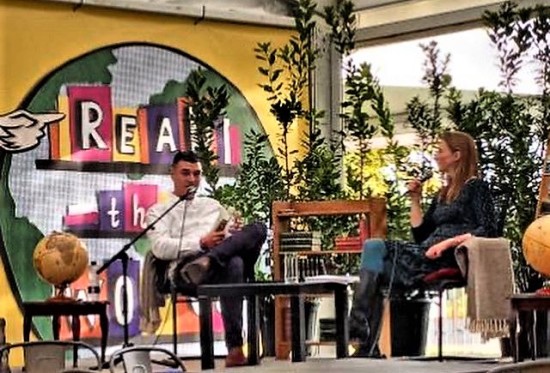 Earlier this month, I had the honour of being Literary Explorer in Residence at the Cheltenham Literature Festival, one of the biggest events in the UK’s literary calendar. Created as part of a three-year focus on the theme ‘Read the World’, my role saw me taking part in 18 events over five days, including launching my new Incomprehension Workshop for adventurous readers and delivering a keynote speech, which you can catch on the #CheltLitFest Player until the end of this year.

The experience led to many memorable moments and fascinating conversations. These included a discussion about crime fiction around the world with international bestseller Ragnar Jónasson, Indian mystery writer Manjiri Prabhu and crime-writing critic and novelist Joan Smith, and an event on what reading the world means with novelist Clare Clark, academic Helen Vassallo, who writes the brilliant Translating Women blog, and translator and social researcher Gitanjali Patel.

I was also delighted to catch up with teams from several of the small publishers my reading adventures have brought me into contact with over the years. Representatives from Istros Books, Charco Press and Europa Editions UK all joined me on the stage in the Huddle to talk about their work championing literature from elsewhere (indeed, the Europa team are in many ways responsible for the continuation of this blog, having prompted me to start my Book of the month slot by persuading me to read the work of a little-known – in English – Italian writer called Elena Ferrante back in 2014).

Of all the conversations I had at Cheltenham, however, one in particular stands out in my mind. It was with Scottish writer Graeme Armstrong, author of the bestselling and award-winning novel The Young Team, only the third UK title I’ve featured in ten years of writing this blog.

Drawing on Armstrong’s experience of gang culture in North Lanarkshire, Scotland, The Young Team tells the story of Azzy Williams, who grows up in a post-industrial wasteland of deprivation, addiction, sectarianism and violence. Narrated by Azzy at the age of 14, 17 and 21, it charts his rise through and eventual fall out of the ranks of the Young Team, taking the reader into the heart of a cycle of neglect and abuse that most mainstream storytelling prefers to ignore.

The book is not an easy read in many senses. In addition to the profanity and violence that fill its pages, it is written in dialect – something that was a key factor in the book being rejected some 300 times before it found a publishing deal. Armstrong explores his desire to write in this way powerfully in his article ‘Standard English is oor Second Language’.

Comparisons to Irvine Welsh’s Trainspotting are obvious – and indeed Armstrong cites reading that book as one of the key inspirations that prompted him to leave gang life and study to be a writer. However, it’s important not to let the Welsh parallel detract from Armstrong’s achievement: in finding a written framework for his mother tongue (as opposed to the east Scottish dialect of Welsh’s novels), he has not only created a new mode of expression but breathed fresh poetry into written English, even as the language strains and cracks to contain the narrative’s voice. (The audiobook, narrated by Armstrong, adds another level to this, even featuring lusty renditions by the author of several Orange marching songs.)

The writing has an extraordinarily compelling, immersive quality. Whether he’s describing tripping at a rave, acting up in school or beating up members of a rival gang, Armstrong captures all the colours of the experiences he portrays. We feel not only the pain and the pity of many of the situations he presents but the humour too, and even the thrill. (‘That was our Vietnam,’ Armstrong told me someone he knows once said, looking back on their shared years in the gang.)

For Armstrong, though, storytelling is about more than simply evoking experience. Now involved with anti-violence and addiction-recovery campaigns, he makes no secret of his ambition to use his writing to effect change. The novel declares this too: each section begins with a striking statistic or piece of research focusing on violence, suicide, deprivation or addiction levels in his home region. At times, it almost has an essay-like quality, with points made, and then illustrated and backed up by the events that follow.

As a result, the pacing takes on an unusual quality in the second half of the book. The fizz and thrill of the early chapters, as we see the young Azzy embrace gang life, dissipate. Instead of the ratcheting up of tension and pace we might expect in a more traditionally plotted book, the narrative takes on a heavier, more contemplative tone. Armstrong has no intention of providing a neat pay off. We are forced to confront the messy consequences of what has gone before and to dwell with Azzy in the aimless brokenness that leads many in his community to be drained of all hope and vitality at 21, whether we like it or not.

This book is not an easy read, but it was never meant to be. As with the first UK book I featured on this blog back in 2012, albeit in a very different way, it forced me to confront the glaring disparity between my reality and the lives of those only a few hundred miles from my front door – the many worlds my nation contains. Its message is too urgent to be anything but uncomfortable. After all, as someone remarked after my conversation with Armstrong in Cheltenham, not many book festival events end with the sentence: ‘Literature saved my life.’