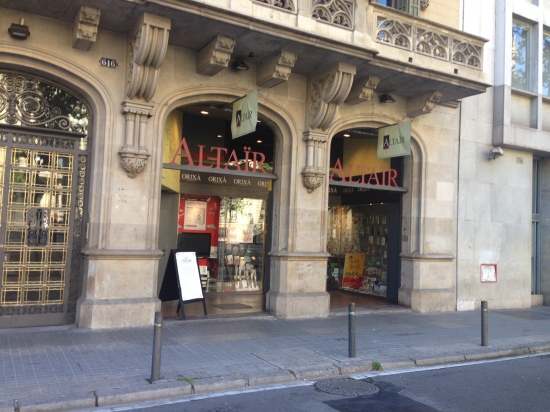 If Stanfords travel bookshop had a Catalan cousin, it would look a lot like Altaïr. On the day I go, wandering in off the Gran Via de les Corts Catalanes and away from the Sant Jordi crowds, I find myself confronted with a treasure trove for those who enjoy combining literary exploration and jet-setting.

Like Stanfords, the bulk of the three-storey emporium is given over to country-by-country sections where the curious reader or would-be adventurer can find factual books and fictional works from the regions in question. The choices can be surprising. Look up Serbia and, alongside Lago de Como (the Spanish translation of the book I read from the nation) you’ll find an English-language copy of American novelist David Leavitt’s The Page Turner. In the Scottish section, you can pick up work by French writer Jules Verne.

As in similar English-language shops, setting rather than author nationality seems to be the deciding factor in the categorisation of texts. But unlike their Anglophone counterparts, Altaïr customers seem to be willing to cross linguistic as well as national boundaries.

When it comes to the shelf labelled ‘Regne Unit’ (that’s United Kingdom to you and me), a varied selection awaits. Books by Charles Dickens feature, alongside offerings from James Herriot, Mark Haddon, Hilary Mantel and Doris Lessing. I was particularly pleased to see a copy of El Relojero de Filigree Street, the Spanish incarnation of the international bestseller by Natasha Pulley, whom I met at the Bath Literature Festival earlier this year.

The lack of translation and distribution opportunities for works from some of the world’s more deprived countries – one of the major challenges during my quest to read a book from every country – seems to hold as true in Spanish and Catalan as it does in English. While most European nations boast their own sections in the store, several African countries are lumped together in the basement with only maps and factual histories by foreign writers to represent a number of them. By contrast, feted authors such as the Egyptian Nobel laureate Naguib Mahfouz have their own mini-sections.

International publishing challenges notwithstanding, the shop must be applauded for the range of its selection. In the section marked Kosovo – a fiendishly difficult nation to find any work in English from – I was delighted to discover Travels in Blood and Honey by Elizabeth Gowing, a British translator, NGO worker and beekeeper, who has lived and worked in the country for much of the past decade.

And the offering doesn’t stop at country-by country. If you’re interested in mountains, you’ll find an area catering for that. If the polar regions capture your imagination, you can while away a good hour or so browsing the explorer memoirs on display. There is an impressive array of photography books, a handsome wall of maps, a collection of publisher-specific stands from which classics by global notaries such as Ferrante, Carver and Marquez can be snapped up, and a swathe of bookcases devoted to the latest smash hits – thrillers and tearjerkers ripe for stuffing into your backpack to beguile those long-haul flights.

Meanwhile, for those who prefer the world to come to them, there are cases of trinkets, scarves and ornaments from different corners of the globe. In addition, Catalonians keen to add a bit of local polish to their English without getting on a plane have the option of resorting to the intriguing volume Laura Lips en habla como los Ingleses. 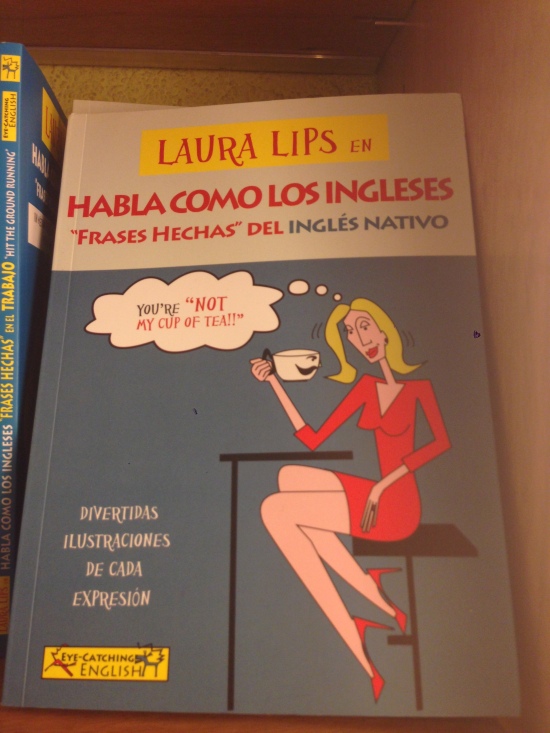 This comes with a word of warning, however: when I flick through, I find a few rather eccentric suggested phrases. In particular, attempts to describe a scolding as ‘a tongue-lashing’, to tell someone to ‘keep your hair on’ or to say that ‘my computer is having a bad hair day’ would be more likely to make most native English speakers I know raise their eyebrows rather than invite you down the pub for a pint.