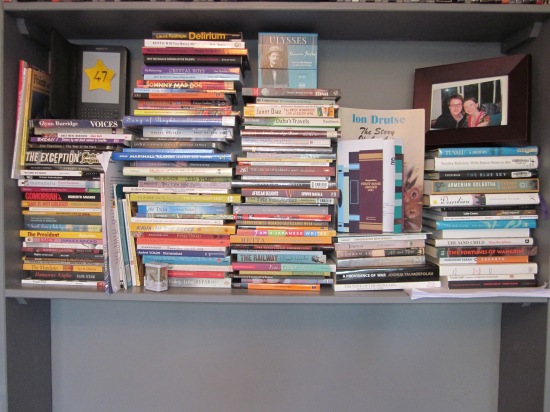 My knowledge of Chinese literature is pretty non-existent, so I was very grateful when translator Nicky Harman offered to talk me through some of the options last month. We met in a coffee shop in Covent Garden, where, sandwiched between groups of students and tourists planning expeditions to Oxford Street, Harman shared some of her insights into books from the world’s most populous country, which is home to a fifth of the planet’s people.

She said that, while a wide range of literature was published in China, a very narrow spectrum of works were available in English. These tended to be rather depressing, violent and, as she put it, ‘masculine’ books, which often made for heavy-going reading. She hoped that Mo Yan winning the Nobel Prize for Literature this year would start to change this by increasing the appetite for publishing a greater variety of Chinese books around the world.

In the meantime, however, Harman did have some tips for me. If I didn’t mind hard-hitting books, Mian Mian’s Candy was a good bet, while Mo Yan’s short story collection Shifu, You’ll Do Anything for a Laugh rung the changes, being both comic and tragic. In addition, Yan Ge (not to be confused with Yan Geling), a young, witty, female writer who Harman said was like a modern Jane Austen, was one to watch. Her work was not translated yet, but would hopefully be available in English soon. The same was true of Xu Zechen, whose short story ‘Throwing Out the Baby’ had been published on Words Without Borders.  In terms of non-fiction, the work of Xue Xinran was well worth looking out for.

In amongst Harman’s recommendations, however, one title stood out: Han Dong’s Banished!. Perhaps this wasn’t surprising, given that Harman had translated the novel herself; nevertheless I couldn’t help being intrigued by her description of the book, which, by the sound of it, provided an unusual – even quirky – perspective on the events of Mao Zedong’s Cultural Revolution. My interest was also piqued by the translator’s comment that the structure of the book, which reads like a memoir, with each chapter devoted to a different character in the village, reflected a popular tradition in Chinese fiction. I decided it would be the book for me.

Drawing on Han’s personal history, the novel portrays the banishment of the Tao family from the city of Nanjing to the village of Sanyu during the late 1960s. Required to ‘learn from the poorer and lower middle peasants’ as part of Mao Zedong’s attempt to erase capitalism and culture from the country, Grandma and Grandpa Tao, writer Tao and his wife Su Qun, and their son, young Tao, must make new lives for themselves. But, while they try to do the best they can with the meagre resources available to them, they must also take care not to do too well and arouse the jealousy of their impoverished and poorly educated neighbours: as objects of suspicion because of Tao’s intellectual past, their best hope lies in striking root and blending in with their drab, new surroundings.

Sinister undercurrents flow through the novel, bubbling to the surface now and then to flood the characters’ lives. From the bleak prospects Tao foresees for his young son and his fear that his wages might be stopped by the Party, to the investigation that makes Su Qun contemplate suicide and young Tao’s memory of the ransacked buildings he saw in Nanjing, there is an underlying sense of the threat hidden in the smallest and most apparently innocuous of decisions.

Most striking of all, however, is not the precariousness of the Tao’s situation, but its strangeness. Little details, such as the ‘good-news troupe’ marshalled to cheer the banished families on their way and the era’s unfamiliar jargon, reveal the profound oddness of the time, as does six-year-old Tao’s misplaced excitement at the initial hurly-burly of the Revolution and his proud boast that ‘our family’s got a bad egg too, and he’s been struggled against’. Indeed, as the anonymous narrator reminds us, the period is in many ways every bit as strange to contemporary Chinese readers as it is to Westerners:

‘I can only sincerely apologize to my young readers or those from another world. The world I describe here was, after all, a peculiar and transitory one, constructed of language that enshrouded and permeated it with what Buddhists call anitya, a mysterious impermanence.’

In the face of such ephemerality, the Taos ground themselves in the rituals of their new lives, devising strategies for survival. These often involve negotiating their way round the alien traditions of their neighbours – from finding a way to decline a proposal to involve young Tao in a childhood betrothal, to trying to outwit the hungry villagers who want to kidnap and eat their pet dogs. However, there are also moments of joy as we share in young Tao’s adventures in his rural surroundings and the family members’ satisfaction at being able to improve their living conditions through their ingenuity. Indeed, the little domestic triumphs of excluding draughts, drawing water and making adequate sanitary arrangements are so engrossing that we are a long way into the narrative before we realise quite what ‘Mr Tao Peiyi, the professional writer’, now ‘forbidden to write his own books’, has lost in the move to this remote region.

The result is a moving consideration of storytelling and the power of human beings to take charge of their identities in even the bleakest of circumstances. Through watching the Taos carve out a life that allows them to retain something of their sense of dignity and purpose in the face of an attempt to erase individuality, distinctiveness and creativity, we see the marvellous resilience of the human mind. Surprising, and rather wonderful.

Banished! by Han Dong, translated from the Mandarin by Nicky Harman (University of Hawaii Press, 2009)

There is just one day left until the Rest of the World poll closes. Vote now to choose which book I should read!