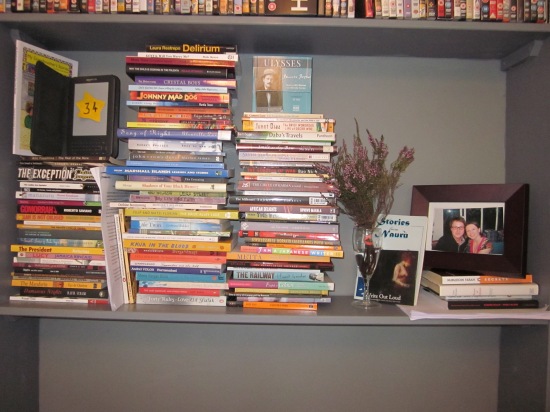 This novel has been sitting on my to-read pile since January. It was one of the books that Steve and I picked out on a frenzied afternoon in New York City when the reality of what this project would involve was just sinking in. That day, we descended on indie bookshop McNally Jackson and, under the bewildered gaze of the staff, spent several hours rifling through the world-literature section and building big piles of possible prose works I could read from some of the most far-flung destinations on the map.

Several of the books I bought that holiday became blog posts earlier in the year, others were shuffled on to my ‘2013-and-beyond’ pile when more intriguing recommendations came in, and yet others still sit biding their time on one of the many heaps of undecided books dotted around our living room as I write. In fact, when I picked up Nuruddin Farah’s Secrets the other week, I couldn’t remember anything about it. It was only when I cast an eye over the blurb that the reason the book appealed to me that blundering January day came flooding back.

Having been exiled from Somalia since the 1970s, multi-award-winning author Farah was finally able to return to his homeland in 1996. Secrets, which came out the year its author won the Neustadt International Prize for Literature, is his first novel since that trip.

The book tells the story of Kalaman, a self-made computer company owner in Mogadiscio, who is forced to confront some devastating home truths when his childhood sweetheart Sholoongo returns from America and elbows her way back into his life. Outside Somali society is crumbling as the civil war takes hold, but inside the tried and tested structures of family and friendship are cracking too, as Kalaman, Sholoongo, his mother and grandfather dredge up recollections and revelations that will shake his sense of identity to the core.

Right from the very first sentence, which is hurled out with the flair of a master magician adept at winning the attention of the crowd – ‘One corpse, three secrets!’ – we know we are in the hands of a great storyteller. Yet, as the novel unfolds and the narrators cut in, querying, contradicting and rubbishing one another’s words, Farah reveals himself as not simply a conjuror, but an alchemist, aware of the conditions that transform the essence of stories and truth into startlingly different forms.

Whether ‘shapeshifter’ Sholoongo is picking Kalaman up on his account of their relationship, which he presents as being dominated by her but she portrays quite differently, or Nonno is unmaking and remaking his grandson’s recollections of his childhood, there are always conflicting and often diametrically opposed versions of events that must be assimilated. Secularism jostles with spiritualism; Islamic teachings rub shoulders with folklore; and the contemporary, naturalist novel finds itself hijacked by superstition, sorcery and a woman with the power to will herself into people’s dreams. As Kalaman reflects, ‘truth, after all, has its dynamism, and memory its momentary lapses’. It is up to each person to ‘inquire into the meaning of truth, and how to distinguish our find from other categories of truth’.

In the face of such multivalency, there is no place for trite simplifications. The inadequacy of the assumptions by which we all too often navigate our way through the world is perhaps most keenly shown in Kalaman’s reflection on common perceptions of the Somali conflict:

‘I let it go as I often have let go foreigners’ throwaway remarks spoken in ignorance, foreigners who held the view that “Somali politics is clan politics”. It would take me years to convince them otherwise.’

The novel does come with a health warning, though: its continual deconstruction of truth and reality can be tiring. Occasionally in the ‘Interlude’ chapters, which feature some of the book’s densest and most opaque writing, I found myself feeling as though I were waiting by the door at a party where an intense philosophical debate had erupted late in the evening, when I was ready to get my coat.

But this probably says more about me than it does about the novel. Overall, this is a rigorous, gripping and intriguing work. It challenges, shocks, delights and entertains in equal measure. An excellent find.