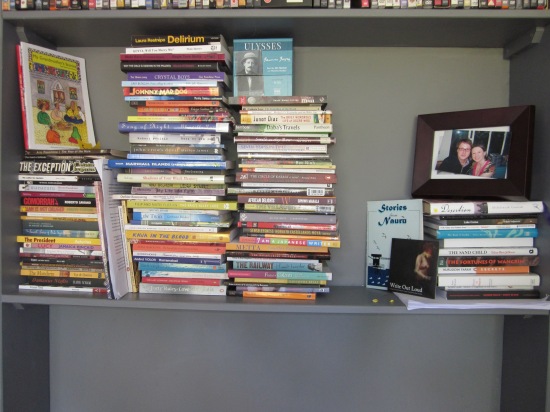 I emailed a lot of people during the search for this book. Some of the messages bounced. Others disappeared into the ether, never to be seen again. But lots of people did get back to me, usually to tell me one or both of two things: that there was no Kiribatian prose that they could think of and/or that there was someone I should contact at the university/library/community project across the way who might know more.

This impromptu game of e-tag led me through Guam, New Zealand, Kiribati itself, Samoa, Fiji, Hawaii and the States, until at last I emailed Sudesh Mishra, an associate professor in the school of creative and communication arts at Deakin University in Australia. He suggested that I look up Teweiariki Teaero and gave me his email address at the University of the South Pacific. Perhaps the poet would have a prose manuscript I could read.

I dropped Teaero a line. He replied the very next day to say that while no novel, short story collection or memoir by a writer from Kiribati existed, his anthologies On Eitei’s Wings and Waa in Storms contained prose pieces as well as poems. Would I be interested in reading one of those?

Curious to see how this mixing of genres worked, I asked which collection contained the greatest amount of short stories. A few weeks later a copy of Waa in Storms arrived.

Bringing together Teaero’s poetry, prose, drawings and paintings, the anthology comprises work from a particularly dark period in the author’s life, during which his parents fell seriously ill, his youngest daughter was hit by a car, and his home community on the atoll of Tarawa was shaken by a series of vicious child rapes. Melding depictions of particular moments and more general reflections on extreme emotions with anecdotes, satirical sketches and occasional rants about island life, the pieces present a rich and layered picture of Teaero’s year.

The use of language in the book is fascinating. While some pieces, including all the prose work, are written entirely in English, others, such as ‘Te Faika’, mix together verses in the Kiribatese language and verses in English. Yet others are written exclusively in Kiribatese. Teaero explains in his introduction that the reasons for this are tied to his desire ‘to express an idea as vividly as possible… [whether] this comes through the use of English, Kiribatese, visual image or any combination of the three’.

For the author, it seems, the three modes of expression have different strengths when it comes to certain ideas and emotions. Although it’s impossible for an English-language reader like me to tell what the subject matter of most of the Kiribatese work is, a note at the end of ‘E Kaaki Baina Te Ang’ (‘Teaia, Tarawa. 18th August 2000. The day my father passed away’) suggests that some of it at least contains extremely personal reflections on the writer’s emotional and family life, while many of the English pieces are outward-looking, focusing on politics, ecology and the wider community.

The inclusion of background details at the end of most of the pieces adds a fascinating layer of meaning to the collection. While some reveal the inspiration for the work, others such as the note, ‘Composed while sitting on the sand dunes in Sigatoka town. 28th January 2001,’ at the end of ‘Sad Parade’ introduce a powerful sense of immediacy to the act of writing, as though we are reading the story of the composition as much as the pieces themselves. And then there are the quirky observations that raise a smile and introduce a huge amount of warmth into the collection, such as the postscript to ‘Size Unlimited’:

‘Suva. 5th December 2000. Composed in the Botanical Gardens of USP. The frogs were very happy, hopping about and croaking joyously every-merry-where! Perhaps they were having an early Christmas party.’

Teaero’s writing seems, for the most part, disarmingly simple. He uses this to great effect in satirical stories such as ‘Merrily Verily Messing with Missing Milkfish’, where the sing-song, childlike tone of the piece is a great tool for sending up corrupt government officials. It can also pay dividends in poems such as ‘Tab-ulous Reunion’ where the almost banal heaping of platitudes on a former teacher builds in a mysteriously moving way. At times, however, the work does feel a little bald, particularly at the end of some of the prose pieces, where Teaero steps out from behind the narrative to appeal for a range of reforms, from equipping the police with breathalyzers and planting more trees at the local hospital to greater transparency in politics, as though he does not trust the story to speak for itself.

But perhaps most interesting of all is the fact that the distinction between poetry and prose in the collection often seems rather meaningless. Several of the poems read as stories, while prose pieces such as ‘Island Time’ and ‘Crowded Buses’ read more as poems that happen to be written in full sentences that stretch across the page. In addition, much of the work incorporates visual aspects, with font sizes and weights and the shape of the poems on the page adding emphasis. Just as outside events and Teaero’s life experiences bleed into and mingle with the works, so the forms mix with and change each other.

The result is a distinctive and memorable collection. Organised into four ‘Waves’, which loosely chart Teaero’s progress through what he calls his ‘annus horribilis‘ in the introduction, the work pulls together to tell a story of suffering and change. It is in many ways every bit as much a narrative as the novels, short story collections and memoirs I’ve read so far this year – and a striking challenge to the system of categorization I’ve used to talk about literature for much of my life.

Waa in Storms by Teweiariki Teaero (Institute of Pacific Studies, University of the South Pacific, 2004)