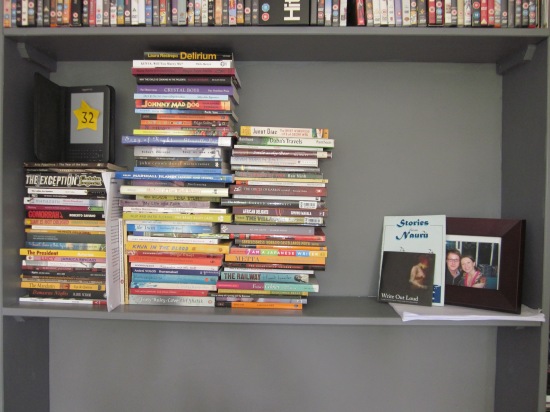 This book was given to me by Jimena, a Mexican woman who attended the English PEN ‘Free Speech: found in translation’ night-class course I finished a few weeks back. She looked apologetic as she got The Brief Wondrous Life of Oscar Wao out of her bag and handed it over.

‘I’m not sure if you’ll want to include it,’ she said. ‘You see, he writes in English.’

A discussion ensued about whether Junot Diaz, now a creative writing professor at MIT, was an acceptable Dominican Republic choice. My classmates wanted to know where he was born (Santo Domingo, the Dominican Republic), where he lived now (the US), and how much of his childhood he’d spent in the country (four years plus holiday visits to relatives from what I can make out). It seemed each one of us had slightly different criteria for judging Diaz’s pedigree.

Personally, I wasn’t sure I would include Diaz. I had several other names in the frame for the Dominican Republic and, excellent though I was sure the Pulitzer prize-winning novel was, I was intrigued to find out about them.

Then two things happened: quite by chance, our course leader Sophie Mayer referred to Diaz’s novel during the session, a coincidence which appealed to my sense of serendipity, and I discovered that the prose work of the other Dominican Republic writers on the list, including Arambilet and Pedro Mir, was by no means readily available in English. Time being of the essence, I decided to give the Diaz a go. It would be a sort of test of where that mysterious boundary line of nationality goes in literature, I thought.

Roving back and forth between the US and the Dominican Republic, the novel follows Oscar, a sci-fi and fantasy nerd and son of a Dominican mother, growing up in the eighties in a rough neighbourhood in New Jersey. Overweight, lonely and desperate for attention from girls, Oscar embarks on a series of excruciating attempts to win the favours of the local beauties, watched first by his rebellious sister Lola and later his college room-mate Yunior.

But it turns out that Oscar’s misery is by no means a one-off. As he unfolds his family’s backstory, Diaz reveals an intricate tale of torture, betrayal, murder and shattered dreams that stretches all the way up to the Dominican Republic’s erstwhile dictator Trujillo and will, quite literally, blow Oscar’s mind.

It’s interesting that a discussion of nationality nearly turned me off reading this book, because the relationship of the individual to cultural identity is one of its central themes. Right from its Derek Walcott epigraph, ending ‘either I’m nobody, or I’m a nation’, the novel explores how heritage informs, shapes and constrains our choices. Everything from the family fear of being under an old Fuku (curse) and the fact that ‘in Santo Domingo a story is not a story unless it casts a supernatural shadow’, through to Lola’s fraught relationship with her mother and Oscar’s relatives’ scorn at his failure with girls can be traced back to a sense of what Dominican life is or should be.

The threads weaving together the personal and national are further tightened by a series of zestful footnotes that run through the book, giving the narrator’s personal gloss on history. Describing aspects of Trujillo’s reign of terror, ‘one of the longest, most damaging US-backed dictatorships in the Western Hemisphere (and if we Latin types are skillful at anything it’s tolerating US-backed dictators, so you know this was a hard-earned victory, the chilenos and the argentinos are still appealing)’, they present a furiously witty engagement with the way politics impacts on individual lives. Feisty, shocking and only occasionally annoying, they grab the predominantly American readers Diaz clearly has in mind by the scruff of the neck and make them acknowledge what has happened, often giving them a parting jab in the ribs – ‘You didn’t know we were occupied twice in the twentieth century? Don’t worry, when you have kids they won’t know the US occupied Iraq either’.

Although Jimena was worried that the fact the  novel was written in English rather than Spanish might weaken its DR claims, the language of the book is shot through with a sense of Dominican heritage. Packed with Spanish slang and even complete sentences in the language, the narrative is raucous with the richness of its cultural references and the conflicts and contradictions these create.

The result is a powerful, irreverent and thoroughly engrossing exploration of identity and how the particular time and place we are born and grow up in shape who we are. If anything, Diaz’s exposure to both US and Dominican society sharpens his perception of the DR. It is as though for both him and his characters, the transition between the two cultures is only truly possible once they have immersed themselves in, understood and made peace with their Dominican heritage. As Lola puts it, ‘you can never run away. Not ever. The only way out is in.’