A little while ago, I was contacted by Anna, a teacher at Go-English language school in Blagoveshchensk city on the border with China in far east Russia – in fact, she tells me, you can see China just across the Amur river (pictured above in one of the photos she sent me).

Anna and her students had been discussing this project and wanted to know about my Russian choices. I sent back a reply and a question – which book would her students choose for me? 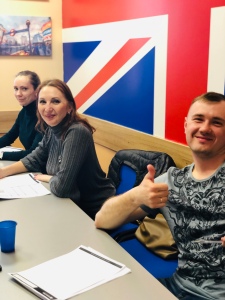 A few days later, I received a response featuring a number of suggestions from Anna’s students, along with explanations for why they recommended each book. The titles they’d picked included Ukrainian author Anastasia Novykh’s Sensei of Shambala (which Evgeniya says completely changed her outlook on life) and Alexander Pushkin’s The Daughter of the Commandant (which describes the ‘Russian soul in every detail’, according to Alina). In addition, Anna had made her own suggestion: The History of a Town by 19th-century author Mikhail Saltykov-Shchedrin, whom she calls ‘the king of Russian satire’.

In the end, however, it was a recommendation for a contemporary novel that caught my eye: the award-winning Zuleikha by Tartar author Guzel Yakhina, translated by Lisa C. Hayden. Irina describes it as ‘a deep thought-provoking book which leaves its positive mark on your heart’, and soon after I started it, I knew it would be my next book of the month.

Set during the period of Soviet dekulakization and collectivization introduced when Stalin came to power in the mid-1920s, Zuleikha tells the story of the nation through the life of the title character. After witnessing the murder of her harsh husband by government forces charged with disenfranchising wealthy peasants (kulaks), Zuleikha is exiled along with thousands of others to a remote region of Siberia. There, the handful of them who survive the cruel journey must build a society from scratch, questioning and overturning many of the assumptions on which their former lives rested in the process.

As with many books that span years and capture the maturing and changing of the central characters, the tone of Zuleikha varies. The grim cruelty of the early chapters recalls other contemporary gulag-related fiction, such as Sofi Oksanen’s Purge, but there are moments of bathos too, as well as arresting imagery. After Zuleikha leaves her hometown and embarks on the punishing six-month train ride around rural Russia that will be the death of many of her companions, a softness creeps in as she begins to forge connections with those around her. This in turn shrinks to baldness in the early days at the settlement, where life is reduced to nothing but a series of punishing tasks necessary for survival, before blossoming to readmit wonder and creativity, seen through the eyes of a child and captured in art.

Tonal shifts notwithstanding, the ingenuity required to survive remains a constant theme. Whether we are witnessing Zuleikha creeping about her husband’s home in an effort to avoid her vicious mother-in-law, or seeing the official put in charge of her train risk arrest with each rare flash of humanity he shows his charges, Yakhina leaves us in no doubt of the precariousness of life in this world. The characters’ physical hardships pale in comparison to the mental suffering they endure and the self-deception they are obliged to practice to negotiate a society hostile to free thought.

Indeed, Yakhina’s ability to depict the collapse of the human psyche under extreme pressure is one of her greatest talents. The supreme example of this involves her portrayal of the breakdown of celebrated medical professor Volf Karlovich, who spends many pages believing that he is insulated from the horrors surrounding him by virtue of the fact that he lives inside an egg, until events force him to break out of his imaginary shell and engage with the real world once more. The unfolding of this episode is exquisite and credit must go to both the author and translator Lisa C. Hayden for the work they have done to imbue it with such tenderness and power.

It’s almost inevitable that in such a sweeping book, some parts drag. Indeed, the nature of the story – in which life is stripped back to its essentials and imagined afresh – necessitates a certain amount of simple, technical description. At points, there is a level of detail and lingering on certain incidental bits of information and action that some anglophone readers may find frustrating, given that such passages would usually be paced differently in comparable English-language novels. There is also a fair amount of recapping, some of which feels redundant.

Overall, however, this is a triumph of a book. It is a masterclass in synthesizing historical research with imagination and insight into how people think and feel. As Irina says, it ‘leaves its positive mark on your heart’. Thanks to Anna and the B2 students at Go-English in Blagoveshchensk for bringing it and the other titles above to my attention.

Zuleikha by Guzel Yakhina, translated from the Russian by Lisa C. Hayden (Oneworld, 2019)