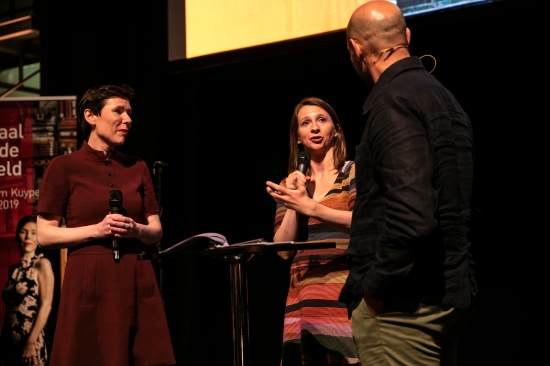 One of the joys of this project has been the opportunity it’s given me to interact with authors around the world. From Turkmen author Ak Welsapar, who graciously asked me to write the preface to the latest English-language translation of his work, to Suchen Christine Lim from Singapore, who sent me a copy of her most recent novel only a few months back, I’ve really enjoyed learning about the lives and processes of so many wonderful writers. Given the geographic spread of the people whose work I’ve read for this project, however, it’s unusual that I meet them face to face.

The author of my latest book of the month is a rare exception. Having shared a stage with Annelies Verbeke at Vrije Universiteit’s Abraham Kuyper Lecture in Amsterdam last month (you can see us in the picture above in conversation with moderator Abdelkader Benali), I was delighted to receive a copy of her novel Thirty Days, translated from the Dutch by Liz Waters. I dived in and was quickly absorbed in what has turned out to be one of my favourite reads of the year so far.

Taking place in the space of a month, the novel follows the experiences of Alphonse, a musician-turned-decorator who has moved with his girlfriend to the rural district of Belgian Westhoek. Discovering that his work and manner often encourage clients to open up to him, Alphonse is quickly immersed in a web of personal tragedies, comedies and intrigues that spreads out across the pages of the novel, binding together everyone he meets and leaving no-one, but especially the protagonist, unchanged.

This is an immensely stylish book. With a strong instinct for the loose connections and quirks in human interaction, Verbeke presents a large cast of memorable and compelling characters. No matter how slight their involvement in the narrative, each of them feels rounded and finely drawn, and comes to us in the midst of pressing dilemmas. From the furious, butterfly-obsessed translator Alphonse encounters at a retreat building he is contracted to paint to the kebab-shop worker with a penchant for ice sculpture who slices off his finger in the process of preparing a shawarma, they all command attention and convey the impression that what we see of them is the merest tip of a deep iceberg of experience and feeling.

This is particularly true of the protagonist, Alphonse. The manner in which his history is revealed is incredibly skilful and invites readers to interrogate their assumptions. Having spent a long time imagining my way into the mindset of a person with markedly different life experiences and cultural markers to my own for my second novel, Crossing Over – which features an illegal Malawian migrant as one of its main characters – I was awed by Verbeke’s ability to take us into her hero’s universe. What’s more, I was envious of the facility with which she is able to make telling points without ever allowing the issues she explores to hi-jack the narrative and render her characters cardboard cut-outs acting in the service of ideas.

Verbeke’s control of the many elements of the story is hugely impressive. Wide-ranging though the narrative is – touching on the First World War, West African music and agricultural history, among many other things – the novel wears its author’s extensive research lightly. All the facts it features have an impact on the story and the writing hardly ever feels showy.

The result is a profoundly moving, insightful and witty piece of work, a book that has the capacity to make readers laugh and cry. It is, quite simply, fantastic. ‘Without a doubt, Verbeke is the greatest talent of her generation,’ proclaims a quote from the Flemish newspaper De Standaard on the front cover of my copy. I can well believe it.