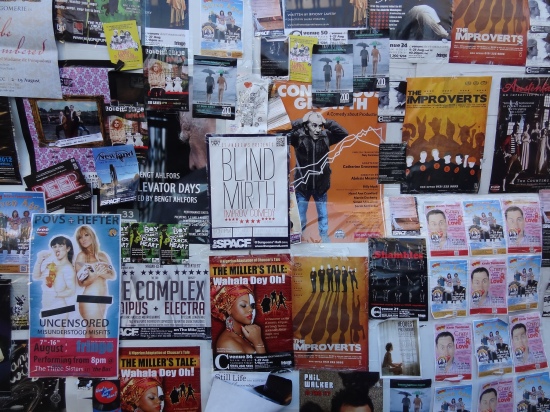 For the past three years, I’ve spent a portion of August in Edinburgh. In fact, twelve months ago I was there to speak at two events at the Edinburgh International Book Festival – a wonderful experience.

But even when I don’t have an official reason for going, these days I tend to feel the call of the north when the brief British summer glimmers into view. And, marvellous though the book festival is, I have to confess that another extravaganza in the Scottish capital has first claim on my heart: the Edinburgh Festival Fringe.

Running since 1947, the annual four-week celebration of all things performance-related is the largest arts festival in the world. This year sees more than 50,200 performances of 3,269 shows from 48 countries taking place across the city.

The variety is extraordinary. If you want to witness South African dancers transforming themselves into a 16-legged beast, you can find that in After Freedom Productions’ I Am Rhythm. If politics is your thing, you could take yourself along to a garden shed in South College Street and get involved in the reading of the 2.6m-word Chilcot report into the Iraq War (or you could have done until it ended after 284 hours and 45 minutes last weekend). And if it’s comedy you’re after, you can take your pick from the hundreds of aspiring stand-up comics and famous names gurning from posters fixed to every lamp-post, phone box and – likely as not – person who stands still too long on the Royal Mile.

The venues are as different as the acts they house. While specially erected tents accommodate some of the bigger shows, numerous shops, businesses, bars and institutions throw open their doors to host performers in their basements, back rooms, lecture theatres and garages. This year, there are 294 performance spaces operating in the city – among them a venue in Blackwell’s bookshop.

Depending on what you choose to go to, you could find yourself wandering the halls of Edinburgh university, scrambling into the store room of a shop, or squeezing into a police box or camper van (both of which have been used for shows in previous years).

As I writer, I always find the Fringe hugely inspiring. I love the energy and excitement. I relish the inventiveness of the performers, and the weird and wonderful characters you encounter both on and off stage.

But perhaps the most exciting thing about it all for me is this: for all their diversity, each of the 3,269 shows is an attempt to communicate something. Every time the house lights go down in venues large and small, someone is trying to tell a story that will hold the attention of a frequently tired, sometimes rowdy and occasionally downright difficult audience for an hour.

Meeting this challenge every day for the best part of a month requires performers to have guts, energy and a creative approach. This may involve mining episodes from their lives for material, as comedian Alice Fraser does in her show The Resistance, which draws on her childhood in her Holocaust-survivor grandmother’s ramshackle home in Sydney. They may get the audience to take part in the action, as happens in the moving and wonderful play Every Brilliant Thing, in which members of the public are drafted in to play characters in the story.

They may take a historical episode and use it as the framework for their performance, as magician David Narayan does in The Psychic Project, a show based on American studies into the possibility of using mind readers as spies in the late-twentieth century. Or they may make it up as they go along, the way that improv-comedy group Austentatious do with their hilarious improvised performances of a never-before-or-since-read Jane Austen novel inspired by a title provided by a member of the audience.

Not every show works (although I should say that I enjoyed all four of the above). But in many ways, that is beside the point. The attempt to communicate is what counts, the daring to take the conch and step to the front of the stage.

As I return to my desk this week and attempt to pick up the threads of the draft of my next novel, the stagefolk of the Edinburgh Fringe Festival will be my inspiration. They will remind me that though storytelling can sometimes be a messy, intimidating business, it is also a great wonder and privilege because of the opportunity it offers human beings to connect.

None of the joy and power that has filled my last few days would have been possible without the bravery, determination and ingenuity of those performers, who each found their own ways to share their stories. What matters is finding the gumption to try.

Photo of posters and fliers at the Edinburgh Fringe Festival (2012) by Jim Forest on Flickr.com.