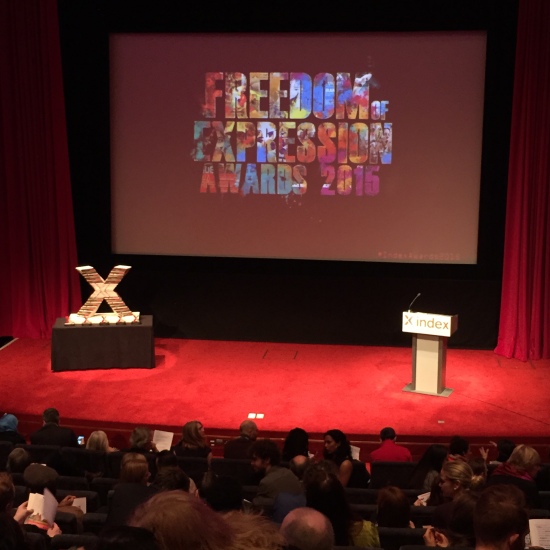 Last night Steve and I had the honour of being guests at Index on Censorship’s gala award ceremony at the Barbican Centre in London. Set up in 2000, the Freedom of Expression Awards celebrate some of the bravest and most creative champions of free speech around the planet, and highlight the sinister efforts of numerous regimes and other organisations to censor and silence dissent – an issue I encountered many times during my Year of Reading the World.

The evening combined a number of wonderful experiences. It was the first time we had ever been in the Barbican’s cinema and lush garden room, where we relished sipping something bubbly and looking at the artwork Index has commissioned from cartoonists around the world in the wake of the Charlie Hebdo attack. I particularly liked the picture by Burkinabé cartoonist Damien Glez, which showed a small boy with one tiny, squashed speech bubble next to a massive, bloated and suited bureaucrat or politician, whose robust pronouncements filled the rest of the page.

It was also the first time I had seen comedian Shappi Khorsandi perform live. She was hosting the event and spoke with great wit and humour about her family’s experience of fleeing Iran after her father published a satirical poem. ‘A fatwa is the Iranian equivalent of an Oscar,’ she quipped.

But by far the most powerful experience of the night was hearing about the nominees in each of the four categories – Journalism, Campaigning, Digital Activism and Arts –and listening to the winners’ speeches. From Kenyan women’s rights activist Amran Aboundi, who dedicated her award not only to those she has helped on the Somali border but also to the people who have threatened her because of her work, to Moroccan rapper El Haqed, who has been imprisoned three times and finished his speech with a performance of one of his hits, the people honoured were an extraordinarily inspiring bunch.

We heard from Saudi documentary maker Safa Al Ahmad – who defied the laws restricting women’s movements to make the film Saudi’s Secret Uprising – about the preciousness of facts in a society where the media is the mouthpiece of the state (you can watch her film below). Meanwhile Angolan journalist and activist Rafael Marques de Morais spoke bravely about the court action he must face in his home country, where he is being sued by numerous powerful figures whom his work has exposed. The experience would only empower him further he said.

Closer to home, Hungarian journalist Tamás Bodoky, founder of Atlatszo.hu, talked about the need for investigative journalists to ‘position ourselves outside the mainstream media’ because most outlets have come to ‘represent the interests of local oligarchs’. In addition, exiled Azeri journalist Idrak Abbasov won a special award in recognition of the dangers that he and many of his colleagues face under the vicious crackdown on free expression in Azerbaijan, where several journalists have been murdered in recent years.

By the time actor Simon Callow stepped on stage to end the evening by speaking about his long-term support for Index and to appeal for donations, no one was in any doubt as to the huge amount of work that has to be done to win and safeguard freedom of expression in every society.

After all, there are plenty of places where even writing a blog post like this is a risky business. And the distance between those places and those of us living in so-called ‘free’ societies is smaller than we might like to think.