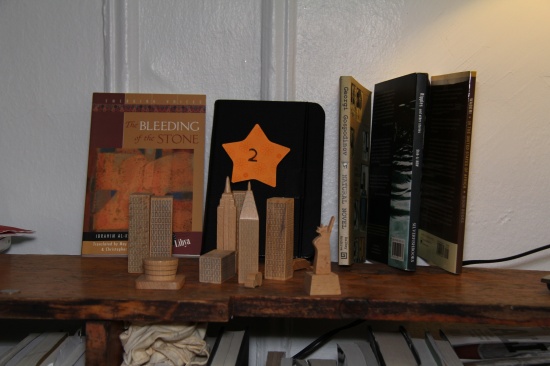 Few countries can have been written about more than Libya over the past year. In the wake of the collapse of the Gaddafi regime and the shockingly public demise of its leader, it seemed an obvious choice to go for a writer who tackled the oppression and terror that gripped the country during the decades of totalitarian rule.

Among the excellent suggestions of titles made to me by Libyan Dr Fuzi El Mallah and Cairo-based blogger M Lynx Qualey were two such books by 2006 Man Booker Prize nominee Hisham Matar, and I was very tempted to go with them.

But then it struck me that the side of Libya we have all seen splashed across the headlines is probably only part of the story. I wondered what else there was to this country that I felt I knew so much about.

Further down El Mallah and Qualey’s list, the answer presented itself in the form of Ibrahim Al-Koni‘s lyrical and mysterious The Bleeding of the Stone. Set in the 1930s in the deserts of southern Libya, the novel follows the ‘lone bedouin’ Asouf, who is instructed to keep watch over a series of ancient caves and wallpaintings that he has known all his life after archaeologists discover them. Charged with giving tours to Westerners and other visitors, Asouf witnesses the encroachment of the modern world on the fragile and beautiful, yet fierce, landscape that he has grown up in, until at last he himself falls victim to the unthinking rapaciousness of those who intrude upon his homeland.

Al-Koni’s sense of the connection between man and nature, his painstaking evocation of the practices and rituals of the desert dwellers, and his poetic descriptions of the landscape, where the sun clothes the desert ‘in the red mantle of its rays’, reminded me of some of the works of Thomas Hardy. The description of the decimation of the gazelles by the cruel tourist Cain, for example, whose greed for fresh meat drives him to take a Land Rover out the better to shoot down whole herds, could have come from one Hardy’s more vehement denouncements of the inroads of the industrial revolution into traditional rural life:

‘Poor gazelle! He doesn’t see how this devilish machine is a betrayal of nature, breaching the rules of noble conflict and seeking to win the day through the ugliest trickery.’

Like Hardy, Al-Koni evokes a spiritual relationship between man and his natural environment, a relationship that requires respect, reverence and balance for its continuance. Asouf, much in the same vein as Hardy’s Tess, is part animist, part pantheist, with a sprinkling of local myths and formal religious rituals thrown in. To him, both Christian and Muslim visitors to the site appear identical, all pausing before the majestic cave paintings with the same wonder. The text, too, is eclectic in its frame of reference, something that Al-Koni takes care to establish from the start with a quote from both the Quran and the Bible at the beginning of the first chapter and extracts from Greek tragedies and ancient Chinese philosophers throughout.

In contrast to Hardy, however, Al-Koni pushes the spiritual aspect of the natural world into the realm of magical realism, introducing a series of strange interludes in which gazelles speak and waddan (the ancient desert sheep that roam the mountain ranges) assume mystical powers. How many of these happen in reality and how many proceed from Asouf’s own lonely imaginings and delusions is never clear, yet they all work to further the sense of wonder and wistfulness for a shrinking way of life that pervades the text.

From the ‘Emerging Voices’ banner under which my edition was published, I assumed that Al-Koni must be a relatively new writer still earning his spurs. It was only that later that I discovered to my shame that he is one of the leading authors writing in Arabic today. From what I’ve read, he is a master of his art, easily equal to the best English language writers. He deserves to be much more widely read in the West.

The Bleeding of the Stone by Ibrahim Al-Koni (translated from the Arabic by May Jayyusi and Christopher Tingley). Publisher (this edition): Interlink Books (2002)