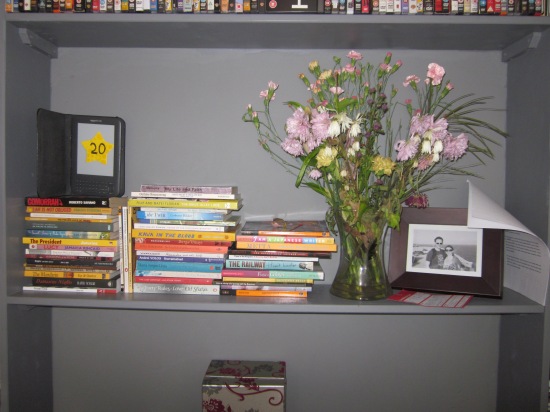 I wasn’t sure what to expect from Gabon. It’s not a country that we in the UK hear much about. In fact, a quick search of the BBC website shows that only a handful of stories have mentioned the place in the last 12 months – and most of them were to do with the African football Cup of Nations.

With nothing to go on, it seemed to make sense to return to a trusted source for a steer on what to read. And so I picked out Daniel Mengara’s Mema from Heinemann’s African Writers Series, a collection which introduced me to the excellent Bessie Head a month or so ago.

I was in for a surprise. Told by a son in memory and praise of his ostracized mother, this is one of the most unusual books I’ve read.

The novel records the downfall of Mema (mother) as she runs up against the strict codes and mores of rural Gabonese society. Left to fend for herself in her in-laws’ village after her meek husband dies, the fearless and even fearsome woman, who has a habit of settling disputes with a machete, finds the whispers and suspicions that have dogged her throughout her marriage swell to fever pitch until she is separated from her children and must watch her son go off alone ‘into the new world that the white man was slowly creating for us’ because it is ‘the only way out’.

Mema’s world is a world of storytelling and rhetoric. When problems crop up, they are dealt with through a medzo or village meeting, during which the most persuasive speakers – usually the old women – carry the day. ‘Tales were what made people wise’ in this milieu of ‘psychological games and scare tactics’, the narrator explains, adding that ‘it was up to the youngsters to show cleverness by getting out of the tale the wisdom that they needed’.

The impact of growing up in a world where everyone is expected to be a literary critic and stories are the way of getting things done, is clear from the narrator’s doubts about what he is doing with his own act of telling:

‘Is it because I have travelled across the seas to the white man’s land that I have decided to desecrate my mother’s memories by telling them to strangers who will not even care to read her story to the end? Strangers who may not like what I have to say or may hate me for daring to say it? And how could strangers understand what I have to say? What will they do when the story of my mother proves too much for them and starts to haunt them, eating them from the inside?’

The novel’s portrayal of the power of women is equally intriguing. While making clear that the society he describes is ostensibly patriarchal, the narrator shows how women maintain control behind closed doors. ‘The lion had to be kept roaring for the sake of appearance’, he explains, but ‘when a woman was angry, nothing in the village worked’. The most striking demonstration of this is played out in the description of the rituals surrounding deserting wives in the region. Form dictates that the husband, who has usually been deserted on the grounds of cruelty, must go to apologise and beg his spouse back from his in-laws,. However if a husband is slow to do this the village women will launch a campaign of non-cooperation with their partners to force his hand.

For all the power women wield collectively, though, the radical Mema finds that individuals who don’t conform face a lonely road. Shunned for displaying masculine traits and daring to use mimbiri (witchcraft) to try to heal her dying husband, she is forced out of society and must carve out her own road for herself and her child.

In the wake of her death, only her son’s fierce admiration remains, fuelling this passionate elegy, which cannot fail to resonate with readers. Angry, abrupt, strange and moving, Mema’s tale is as haunting as its narrator describes. I was consumed and challenged by it. In its turn it will give me food for thought for a long time to come.

Interesting spot in Changi airport. Here, books aren’t buy one get one free or three for the price of two but buy three get one free. Do people in Singapore read more than the average bear or are books relatively pricey here? #bookstagram