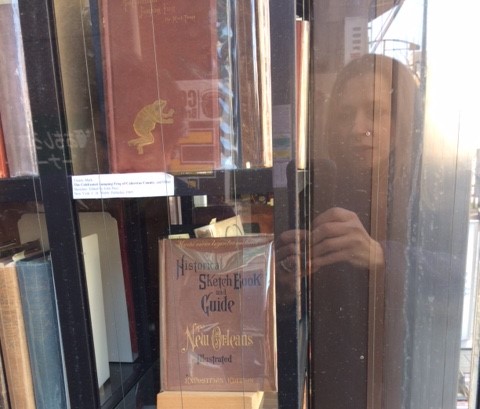 On a recent trip to Tokyo, I had lunch with my Japanese literary agent and Mr Akira Yamaguchi, editor in chief at Hayakawa Publishing Corporation, which will be publishing my novel Beside Myself later this year. Over an array of delicious dishes of tofu, meat, fish, rice and miso soup, I decided to pick their brains about bookshops in the capital.

Both men were in agreement: I should visit Jimbocho. And so that afternoon I lost no time in following up on their suggestion.

Jimbocho is not a single shop but an entire neighbourhood devoted to bookselling. Well over 150 bookstores operate here, catering to the many enthusiastic bibliophiles for whom this city of more than 13 million people is home.

Interestingly for a society in which technology is so seamlessly integrated into many aspects of daily life – from vending-machine ordering systems in many restaurants to washroom facilities – ebooks are not very popular in Japan. Although the nation spawned the cell-phone novel, one of the earliest forms of literature to be widely enjoyed on-screen, most Japanese are apparently reluctant to buy electronic devices purely for reading. As a result, the physical book is still the preferred format for many of the nation’s readers and certainly those in the older generation.

This much is evident is in bustling Jimbocho, where crowds of booklovers throng the new and second-hand shops in search of their latest read. You can find anything you can think of here and a lot more besides.

Although the vast majority of books sold here are in Japanese, anglophone visitors will recognise many of the names and faces peering up from the covers in the shops stocking contemporary fiction. Home-grown superstars such as Murakami rub shoulders with English-language commercial giants, as well as internationally renowned authors working in other languages. Pierre Le Maitre is hugely popular: the Japanese version of his novel Alex has sold more than a million copies and it seems no mystery section is complete without him.

There are also some surprisingly niche titles in the mix. You might not expect sheep farming in the UK’s Lake District to be of much interest to city dwellers on the other side of the world, but you can find new publications on it here.

And there are instances of not particularly well-known writers from elsewhere who have an unusually devoted following in Japan.

I was particularly pleased to spot a novel by the US writer David Gordon prominently placed in one window display. In 2014, Gordon wrote a witty article in the New York Times about the surreal experience of discovering that his modestly successful debut novel The Serialist had become a smash hit in Japan. ‘You might not know me, but I’m famous. Don’t feel bad. Until recently, I didn’t know I was famous either, and most days, even now, it’s hard to tell,’ the feature begins.

But though many of the names in the contemporary-fiction sections may be familiar, the layout of the shops can take some getting used to. Rather than being arranged alphabetically by author name, paperback novels are ordered by publisher, with special tabs for famous writers. As a result, in Japan, authors are particularly reliant on their publisher having strong distribution arrangements with retailers: unless the press releasing your book has good shelf presence, your creation is unlikely to find its way into readers’ hands.

In addition, there are several sections that you would be hard-pushed to find in most English-language bookshops. As well as the extensive manga aisles – featuring strikingly large erotica sections in some stores – there are shelves devoted to a particular kind of Japanese non-fiction (known, as far as I am aware, as shinso), which is written with the aim of helping intelligent readers get to grips with particular topics and issues of the moment. Running to around 200 pages, these books are extremely popular – so much so that it is common for publishers to commission writers specially to produce them. Slender yet thought-provoking, these titles are the perfect companion for commuters braving crush hour – as are small-format versions of longer books, which are often sold split into several volumes, partly for ease of reading in tight spaces.

The new-book trade is just one facet of what Jimbocho has to offer. In fact, most of the stores and stalls you’ll see in the district offer primarily second-hand works. As varied as the titles they sell, many of these places specialise in particular subject areas. There are shops devoted to writing about music or titles from particular language groups.

Here and there, you’ll spot cardboard boxes stuffed with Western classics and contemporary bestsellers. And there are also a number of stores that carry first-edition anglophone books.

Often gleaned from house clearances, these titles offer occasionally mind-boggling insights into the tastes of some of the English speakers to have lived in Tokyo. I spent some time browsing the shelves in Kitazawa Bookstore, a wood-panelled emporium at the top of a curved staircase.

There, along with early editions of works from many famous, largely American, names – Hemingway, Melville and Stein among them – I was intrigued to encounter A History of Secret Societies, Welsh Folklore and Folk-Custom and WOG Lofts and DJ Adley’s formidable-sounding The Men Behind Boys’ Fiction.

It made me wonder if, long after I have written my last post on this blog and slipped off into virtual oblivion, a UK first edition of Beside Myself might one day find itself here, six thousand miles from home…