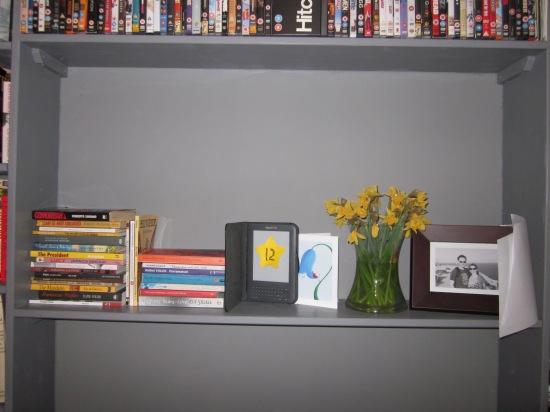 Weighing in at 672 pages, Neil Gaiman’s American Gods nearly disqualified itself on girth alone — particularly when I discovered that the 10th anniversary edition featured an extra 12,000 words not published before. To my page-swamped mind, this was bordering on rude.

There was another objection too: despite having lived in the United States for 20 years, having children there and being married to an American, British-born Gaiman is not a US citizen and has said that he has no intention of taking citizenship. Would this book by a perpetual outsider really count as US literature?

But Carol, who recommended the novel, was very insistent and so, kissing my weekend goodbye —  and dodging the glares from Roth, Steinbeck, Oates, Hemingway, Chabon and the host of other American greats up on my bookshelf —  I holed myself up and began to read.

Bold, baggy and mind-boggling, the novel traces the fate of the gods brought to the land of the free by immigrants, right from the arrival of the earliest prehistoric visitors to the refugees and fortune-hunters of the present day. The story is told through the eyes of Shadow, who gets out of prison to find that his wife and employer have been killed in a car crash, taking with them his hopes of a normal life. With nothing to lose except his new-found freedom, Shadow goes to work for the mysterious Mr Wednesday, who seems to know an uncanny amount about his life.

Wednesday’s omniscience is no accident. As head of the collective of traditional gods who are finding themselves sidelined for the ‘gods of credit card and freeway, of internet and telephone’, he is rallying his troops for a battle between deities old and new. But as the storm approaches and breaks, it seems that the gods themselves may be labouring under false beliefs.

Gaiman’s writing is refreshingly approachable. At times echoing the stripped-back voices of Hemingway and Steinbeck, the narrative manages to carry humour and philosophical reflections equally lightly, blending fantasy, mythology and a quirky, humane perspective that is all Gaiman’s own. This is helped by some surprising imagery — the description of driving into Chicago, for example, so that the city ‘happened slowly like a migraine’, and the presentation of the hinterworld ‘behind the scenes’ are particularly memorable.

Gaiman also has the knack of making us care quickly. The narrative veers off repeatedly into stories of some of the many travellers who came to America to make a life and, for the most part, these are compelling in their own rights, as well as giving the philosophical and mythological arguments in the book a human face.

This gives rise to some great reflections on what it means to be a nation of immigrants. ‘Nobody’s American. Not originally. That’s my point,’ says Wednesday at one stage, articulating sentiments that resonated particularly strongly for me as a Londoner proud of having grown up in a city that is home to people from nearly every nation of the world. Given the definition of US nationhood Gaiman posits in his novel, he, as an ex-pat Brit, fits right in.

By rights, I should be angry with this book. It kept me up at night, it made me late for trains and towards the end it made my eyes go a bit fuzzy. If this book were someone I knew, I’d definitely be thinking about unfriending it on Facebook. But as a book, it’s an impressive achievement that leaves readers very little room for doubt of its power or the pleasure of spending time in its company. Several novels further into my quest to read the world, Gaiman’s characters still people my daydreams. Thanks Carol for introducing us.