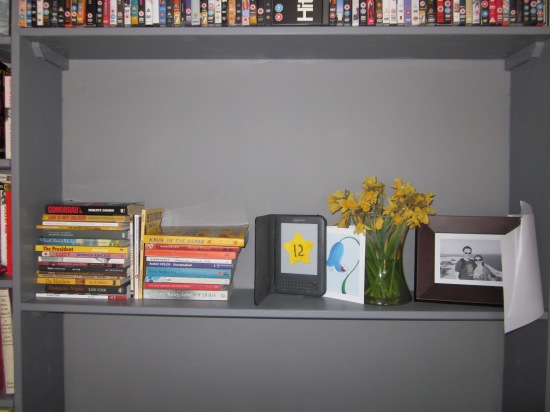 Regime change seems to be the theme of the moment. No sooner had I finished YB Mangunwijaya’s satirical portrait of post-independence Indonesia than it was time to start Peter Thomson’s Kava in the Blood, an account of the coups that shook Fiji in 1987.

I was particularly intrigued to read the book because Dr Chakriya Bowman, Director of the Pacific Islands Forum Secretariat’s  Economic Governance Programme, found it for me after stopping by this blog. She very kindly visited the University of the South Pacific’s bookshop and emailed me the details and pictures of all the books she found that fitted the AYORTW criteria. Thomson’s EH McCormick Prize-winning memoir was one of these.

In fact, as Thomson acknowledges in his 1999 Foreword, Kava in the Blood contains not one story but two. Alongside his ‘account of what happened at Government House’, where he worked as Permanent Secretary of Information during 1987, he tells the poignant story of his love affair with the country his family emigrated to from Scotland four generations before he was born.

The question of what constitutes nationality and national identity is at the heart of the book. Not only is this the catalyst for the coups, sparked after Fiji’s first non-indigenous-dominated government came to power, but it also forms a powerful theme in Thomson’s personal life.

Despite having been born and brought up in Fiji, Thomson is forced to confront the fact that he has not been completely accepted into the ‘closed shop’ of Fijian society when the indigenous community closes ranks against ‘outsiders’ in the wake of the first coup. ‘I felt a creeping sense of delusion at being part of a country which, because of my European forbears, was now pointing a finger at me and saying “vulagi” — the Fijian word for visitor, or in this sense, foreigner’, he explains, going on to write wistfully of the ‘sense of oneness’ his indigenous peers must feel with the landscape and culture he loves.

This love is apparent throughout the book. It shows itself in Thomson’s humorous accounts of some of Fiji’s more bewildering traditions — ‘to those not used to it, a kava [Fiji’s national drink] session can have similarities to Chinese water torture,’ he writes — his deep knowledge of the nation’s culture, plants and animals and history, and his lyrical descriptions of life under the ‘arching starscape of our southern skies’.

The narrative is packed with fascinating and affectionate insights into Fijian society, including reflections on everything from Fijian patois through to the island’s prison system and the after effects of British colonial rule. Thomson’s recollection of establishing a polling station on Naqelelevu in 1976 in his capacity as district officer the day only one of the six eligible villagers turned out to vote is particularly memorable:

‘With absolutely no sense of the ridiculous the polling station was declared open. The voter went through the identification process and then turned to the little audience of seated villagers, ballot paper in one hand […]. Grinning self-consciously, he stood there long enough for the audience to take their mental snapshots of his moment of importance, and then another official guided him to the white wooden polling booth we had shipped with us.

‘The booth had been set up some distance from the table, giving the event an added sense of space and time. The official politely advised the protagonist to take his time with his vote. Inside the booth he did just that, while the rest of us on Naqelelevu that day looked on solemnly. Finally the booth started wobbling as he went through the motions of pacing his mark on the ballot paper. He emerged. Everyone pointed to the ballot box, and he went over to it and dropped the paper into its slot. He then stood for a while in front of the box like someone whose [sic] just won a TV gameshow, with a sheepish grin and not knowing quite where to put his hands.

‘With [the] lonely ballot paper… inadvertently eliminating the principle of the secret ballot, we packed up our gear, and bade farewell, sailing off to the south and leaving the islanders to their thoughts on the wonderful machinery of democracy.’

These rich recollections, along with Thomson’s exquisite accounts of his childhood on the islands, which read like extracts from a tropical Swallows and Amazons, more than make up for the jerky and episodic nature of the book, which sometimes feels more like a series scrapbook notes and jottings than a memoir. The addition of Thomson’s photographs into the 2008 edition heightens this impresion, giving the whole thing an immediate and personal quality. At points reading it feels as though you are sitting with Thomson under the giant rain trees outside his Waijevo residence, looking at his family album and waiting for the kava cup to come round.

Although writing in exile, after the second 1987 coup and four days of unlawful incarceration, during which he says ‘the umbilical cord to my homeland was cut’, Thomson’s love for Fiji clearly persists. As his two Afterwords suggest, his story of his island homeland is one from which he finds it hard to tear himself away. I did too.

Kava in the Blood by Peter Thomson (Booksurge, 2008)

PACIFIC APPEAL: do you know any good novels, short stories, memoirs, writers or even oral storytellers from other Pacific nations? Do you have friends or relatives in the region who might be able to suggest stories? Leave a comment or email ann’at’annmorgan.me and let me know.