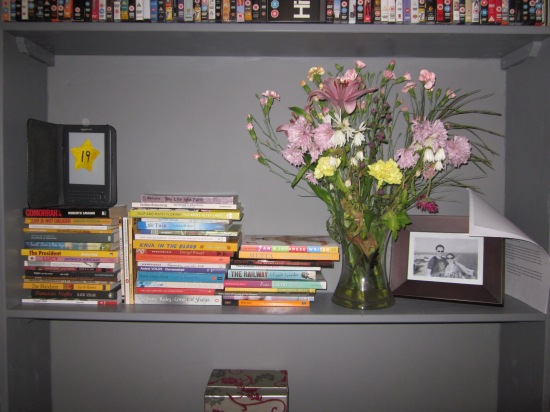 The question of what counts as ‘national literature’ is a tricky one. As I’ve found during the first four months of this project, lots of people have very different ideas about what it means.

Some people say it’s all about books by people from particular countries. Others think it has to be set in a certain place. The real hardliners claim it’s both, while another contingent argues that it’s more about what stories countries consider to be part of their national literature.

As the months have gone on, I’ve found myself leaning towards a definition involving books written by people with strong connections to particular nations. Usually these will be people with citizenship, but at the very least they’ll be writers who have lived in a country long enough for it to be woven into the story of who they are.

However, the protagonist of Dany Laferrière’s novel I am a Japanese Writer, which is on the shortlist for the 2012 Best Translated Book Award, would probably disagree. Having bagged an advance for his next novel on the strength of the title alone – it’s also called I am a Japanese Writer – the Haitian-Canadian struggles to get started on the manuscript. Claiming to be ‘tired of cultural nationalism’ and wanting to ‘show that borders have disappeared’, he attempts to immerse himself in whatever Japanese culture he can find in his home town of Montreal in the hope that a story will emerge from it. But when news of the book sparks a cultural movement in Japan and the Japanese embassy wants to involve him in all sorts of literary ventures and events, the writer finds he may have bitten off more than he can chew.

As the subject matter suggests, the book unpicks what makes up works of art. For my purposes, the meditations on cultural identity – from comments highlighting the oddness of concepts such as the ‘French kiss’, which ‘exists everywhere but France’, to full-blown discussions of nationality – were particularly fascinating. I couldn’t help but be challenged by one particular passage early in the narrative:

‘I don’t understand all the attention paid to a writer’s origins. […] Very naturally, I repatriated the writers I read at the time. All of them: Flaubert, Goethe, Whitman, Shakespeare, Lope de Vega, Cervantes, Kipling, Senghor, Césaire, Roumain, Amado, Diderot – they all lived in my village. Otherwise, what were they doing in my room? Years later, when I became a writer and people asked me, “Are you a Haitian writer, a Caribbean writer or a French-language writer?” I answered without hesitation: I take on my reader’s nationality. Which means that when a Japanese person reads me, I immediately become a Japanese writer.’

Where did this leave A Year of Reading the World then? Was I being foolish to even contemplate something so reductionist as trying to read a book from every country? Was I one of the ‘space police’ the protagonist describes, grimly shoehorning writers into boxes they would never choose? What if, as Laferrière’s protagonist would have it, I was simply assembling piles of British books on the shelf in my living room because, being British, I was unable to read books on any other terms?

These weighty discussions are offset by the narrator’s self-deprecating humour as he repeatedly dismantles his soap boxes and shifts ground. The witty portrayal of writer’s block and the protagonist’s ham-fisted attempts to immerse himself in Japanese culture – at one stage he bombards a bewildered Korean with questions on the assumption that the two countries are ‘the same thing’ – are great fun.

In addition, the arguments are undercut by the way Laferrière circles his readers, Sumo-wrestler-style, daring us to make the false move of conflating his protagonist with him. The writer may be a Haitian-Canadian living in Montreal and working on a novel with the same title as his creator’s, but he is of course not Laferrière. Or is he? And would it add any more authenticity and credibility to his arguments if the two were one and the same?

Ultimately, of course, the protagonist’s self-deterministic approach to his own work is blown apart by the wild reaction of the Japanese. Whether he likes it or not, the work he produces (or, in this case, has yet to produce) can not be controlled. As this fiendishly clever and enjoyable book demonstrates, the act of publishing is about setting a work free for others to criticise, categorise and cannibalise as they chose. Cultural nationalism may be a construct, but it is a construct to which the vast majority of the world subscribes.

Does that make it true? I don’t know. But hey, if all I’m doing here is assembling a library of British books, novels like this mean it’s definitely my most interesting and diverse collection to date.

I am a Japanese Writer by Dany Laferrière, translated from the French by David Homel (Douglas & McIntyre, 2011)